“Everything Everywhere All at Once,” directed and written by Dan Kwan and Daniel Scheinert, echoes the experimental nature of A24’s extensive filmography. Playing with emotional and physical geography, this action-packed multiverse adventure is a story of family at its core.

The film follows Evelyn Wang (Michelle Yeoh), a Chinese immigrant running a laundromat with her kindhearted husband Waymond (Ke Huy Quan) and daughter Joy (Stephanie Hsu). The opening scenes depict the mundane yet chaotic nature of this family as Evelyn scrambles to pay their taxes in time while planning a Lunar New Year party, processing her husband’s wish for divorce and taking care of her elderly father (James Hong).

Evelyn wishes for a life where she doesn’t feel obligated to her business and free from the constant disapproval of her father. As a result, her discontent negatively affects her loved ones. Waymond often feels neglected, and Joy experiences rejection as she tries to introduce her girlfriend to her family.

Trouble ensues when the family visits the IRS to file their taxes. Evelyn is confronted by a version of her husband from another universe, asking her to save the multiverse from a villain who seeks to create chaos — Jobu Tupaki — a variation of her daughter Joy.

This expansive sci-fi narrative, packed with traditional Wushu fight choreography and the intricate dynamics of Evelyn’s family, forces Evelyn to become the unlikely hero of the movie. By tapping into her different lives from other universes, Evelyn obtains the skills and powers needed to try to save the world, and more importantly, her daughter. While Joy is portrayed as the villain of this story, the nihilism plagues her and prevents her from seeing that the love in her life is the true force that must be defeated.

Hsu joined the audience to watch the film, hosted a Q&A session afterward and gave insight into the process of filming and portraying her character’s struggles.

“It’s hard to make nihilism scary and tangible,” Hsu said. “It’s an inexplicable concept, but it’s something that we all see, and it’s built into our biology. It’s infinite and nothing all at once.”

It’s shocking that a movie this emotionally layered and witty was filmed in a mere 38 days, a testament to the teamwork of the actors and production team. Despite being on a tight schedule, Hsu said her co-stars’ artistic compatibility made the process easy and enjoyable.

“Michelle is one of the most generous scene partners ever,” Hsu said.

While the plot and circumstances are extremely chaotic, whether it's a fight between a Mariachi costume-adorned Joy and the Chiquita Banana Girl or Evelyn having hot dogs as fingers in an alternate universe, the consistent thread throughout their adventures is that the family continues to find each other in every iteration of reality.

“There is something comforting about believing in the multiverse and knowing the people you love will always be there,” Hsu said. “I love it because it’s both existentialist and poetic, but also about family.”

The film portrays how the Wang family processes experiences of the Chinese diaspora throughout generations in an authentic way, with the family’s conversations flowing between English, Mandarin and Cantonese.

“What I love about our film is that it transcends identity politics. The Wangs are an Asian immigrant family and Joy is gay, but these aspects are parts of the film’s texture. The story doesn’t hinge on the fact that this is who they are,” Hsu said. “And I think that’s important for the next steps of what inclusion or diversity means in Hollywood. It’s really nice to see a family and hear three different languages without feeling like the film is trying to prove to you that they’re worth being heard.”

The film not only portrays Evelyn’s journey toward being grateful for her life, but the heartbreaking experience of a mother fighting to show her daughter that she loves her.

Hsu elaborated on how she applied aspects of her Vietnamese-American identity and relationship with her mother to Joy’s character. Hsu watched the film with her mother and hopes the film provides a healing space for others:

“Hopefully when you create something with good intentions and the desire to provide someone healing, it inspires people to think ‘I would love to bring my mother to this movie because we can’t have these conversations, but maybe she can sit here for two and a half hours and know how to love me a little better,’” Hsu said.

“Everything Everywhere All at Once” was released in theaters on April 1. 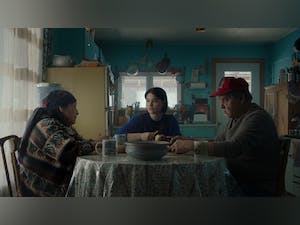