REVIEW: ‘The Batman’ exceeds expectations with a fresh take on a classic hero

“The Batman” utilizes the same recipe that has caused many DC Comics films to fail: introducing several characters at once and doing so outside of a hero origin story. But this time, producer, writer and director Matt Reeves has finally perfected the ratios of action, emotion and intrigue to create not only a great superhero movie, but a fantastic film in its own right.

“The Batman” follows Bruce Wayne, played by Robert Pattinson, a few years into his career as the Caped Crusader. When sadistic killer the Riddler (Paul Dano) begins targeting the most powerful people in Gotham City, Batman must solve clues the killer leaves behind before the Riddler’s plan is fully realized. With the help of the few friends he has in James Gordon (Jeffrey Wright), Alfred Pennyworth (Andy Serkis) and Catwoman (Zoë Kravitz), Wayne begins to realize just how deeply his own life may be connected to the mystery.

With a story worthy of Detective Comics’ name, “The Batman” is a slow-burn thriller that becomes increasingly engrossing as the film progresses. Instead of an edge-of-your-seat action movie, it's a detective story that has the audience leaning forward as they, alongside Batman, try to untangle the plot’s many mysteries. The film marks a refreshing addition to a genre that’s become awash with over-the-top explosions and flashy battle choreography.

That being said, excluding one epic car chase, the fight scenes are about as clunky as Batman's boots. However, the lackluster punches are made up for by Reeves’ clever dialogue and surprisingly cinematic, gothic sequences. The director brings the world of Gotham to life in a way that honors the source material, with some scenes feeling as if they were torn straight from the comic’s pages.

When Reeves announced that he’d chosen Pattinson to take up the Bat’s cape, many fans reacted with trepidation. Despite all the initial doubt, Pattinson is perhaps the most interesting Batman to date. He gives the Caped Crusader a Sherlockian quality that’s previously been lost to Batman’s fists, fancy bells and whistles. His performance feels the most loyal to the obsessive vengeance that drove the comic character, and he’s able to weave in truly touching moments while behind the mask.

Kravitz too imbues humanity and depth into a role that has all too often been reduced to a femme fatale. Gone is the overstated sexuality and ridiculous heels worn on high-stakes heists. Instead, we receive a dynamic character that is not only a foil to Batman, but his equal. Kravitz’s performance is a standout among a talented cast. She’s calculating and sly in one scene and touchingly loyal and surprisingly vulnerable in the next, creating a Catwoman that is as interesting as she is alluring.

The Riddler makes a captivating villain. This comes as something of a surprise considering the goofy menace he’s been in the past. Reeves’ Riddler is an entirely different killer, as clever as he is insane. His character is a fascinating study in insanity that’ll have any true crime fans reaching for their notes on psychopaths. The Riddler’s use of social media makes his threat feel all too familiar in an age where attacks on capitals are broadcasted through cell phones.

In this way, “The Batman” is tailored to the modern age without being tethered to it. Possibly for the first time ever, Wanye is also faced with his privilege as a man who lost his parents, but never had to go through foster care or an orphanage. His choice to become a hero, something that would be impossible without his immense wealth, is put in a new perspective when contrasted with the backgrounds of his nemeses. It's a point made all the more poignant through its subtlety.

This Batman speaks to a generation of theatergoers that can sympathize with the gritty realities of systemic failure. The fury that both the hero and the villains feel rings true for an audience all too familiar with corruption and distrust. Nonetheless, “The Batman” avoids languishing in hopelessness, creating a complex balance between outright cynicism and cautious hope that makes the film all the more relevant.

“The Batman” will be released in theaters on March 4. 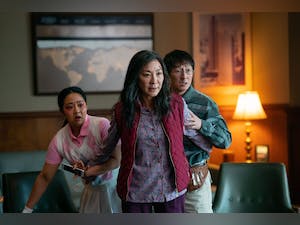