REVIEW: ‘Black As Night’ tackles gentrification with a twist of comedic-horror

From Blumhouse Television’s second installment of the horror anthology, “Welcome to the Blumhouse,” Maritte Lee Go’s “Black As Night” is a comedic-thriller-meets-vampire-chick-flick that tackles the issue of gentrification among the low-income neighborhoods who face this issue daily.

The film begins with Shawna (Asjha Cooper), who faces the hardships of living with her father and brother while her mother is staying at Ombreux Heights, New Orleans. The plot revolves around Shawna battling recent vampire outbreaks alongside her best friend, Pedro (Fabrizio Guido) and her high school crush, Chris (Mason Beauchamp).

Ombreux Heights embodies the aftermath of Hurricane Katrina, where many were left without homes and suffered through addiction and poverty. The film hinges on Shawna’s imperfect relationship with her mother, which we witness when Shawna tries to get her mother out of Ombreux Heights.

One particularly strong scene is the moment where we see Shawna’s mother holding onto her locket necklace with her children’s picture in it. This interaction speaks a lot louder than words because we see the true reality of how difficult it is to overcome addictions for our loved ones. The film also magnifies the race and class issue of minority groups not having access to resources for rehabilitation after trauma-induced events. We see the psychological and behavioral effects addictions can have on individuals through Shawna’s mother, who endures life-threatening situations, yet still asks for more money to continue feeding her addiction.

After Shawna’s visit, she encounters a group of homeless vampires who emerge from the street and attack her, but she manages to escape. Reluctant to fall into victimhood, she fights alongside Pedro and Chris to end this outbreak once in for all. As vampires start to overrun Ombreux, Shawna’s only choice is to stay and protect its residents.

Asijha Cooper's performance shines throughout; she beautifully translated the race and class issues of the film from a Black woman’s perspective. Cooper shows Shawna’s character arc from living in fear to becoming a fearless leader. For example, Shawna initially couldn’t bear to look at those who wanted to rebuild Ombreux out of shame. As the film goes on, Shawna changes and we see her giving away posters and taking leadership in this rebuilding project. Cooper’s strong and heroic performance was able to show that character’s growth.

The plot lingered in some areas for too long while rushing character development, resulting in jarring shifts that felt abrupt for the film’s relatively short runtime. “Black As Night” had the potential of raising other issues, such as exploring Shawna’s contribution to rebuilding Ombreux in order to fight gentrification.

But all in all, “Black as Night” impresses audiences as it dives into social commentary and the presence of addiction in society through a cleverly disguised horror premise.

“Black As Night” is available to exclusively stream on Amazon Prime Video as of Oct. 1. 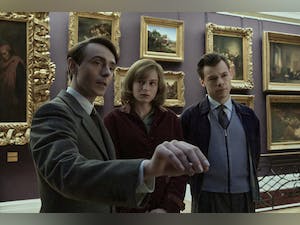