Editor’s note: Questions and answers have been edited for clarity and conciseness.

Ben Sharrock's second feature film, “Limbo,” subverts the narrative of refugee life, while still delivering stunning visuals and chuckle-worthy dark humor. Originally scheduled to premiere at the Cannes Film Festival in 2020, “Limbo” was instead released this Spring to critical acclaim. The film follows Omar (Amir El-Masry) — a Syrian refugee on a rural Scottish island — and the isolation he feels, an effective depiction of the difficult and emotional transcultural experience that refugees face as they await their asylum claims. On this island, Omar struggles to comprehend his situation and reminisces over his old life in Syria where he was a musician. The Eagle sat down with Sharrock — who wrote and directed the film — to talk about how personal “Limbo” was for him, the film’s absurdist take on xenophobia and how difficult it was to film on location. Read our review of the film here.

Tristan Au: One thing I found powerful was how “Limbo” takes a humanizing approach to the refugee story, especially when refugees have been demonized and ostracized. Why is the humanizing element important, and how did you incorporate that lens in your screenplay and direction?

Sharrock: For me, the film had to do something different, something that other films like documentaries weren't doing with this subject. I went through many iterations of different stories and eventually ended up on a remote Scottish island and a group of asylum seekers. I knew that I didn't want to focus on their journeys as refugees because that's something that we were sort of inundated with.

I wanted to pull away from the idea and image of refugees and focus on them as human beings; what they're interested in, what music they like, their friendships and relationships, like Omar and his family. I should add that this film is connected with my time living in Syria. I looked to both the friendships that I made there and to those I met in the development and writing process who have been through the asylum system in Scotland.

Au: I think the film reaches a transnational understanding and audience, while also feeling deeply personal and relatable in different ways. From what I gather, this film is a very personal project for you.

Sharrock: It is, and it's a subject matter and area of interest that I’ve had for a long time. It stems back to my time in Syria, which were some of my formative years. I wanted to do justice to this subject matter, so this film was also a huge responsibility that took a lot of work and effort.

Au: One way that you do the subject matter justice is by including nuances of language, like when Omar talks to his family in Arabic. Even dialogue between other Scottish people and Omar presents opportunities for comedy. And I don’t know if it's just my understanding, but sometimes the Scottish people are harder to understand when they speak.

Sharrock: Yeah! A lot of people have said that.

Au: I think the film uses comedy in interesting ways, and I would like you to elaborate a bit further: why this kind of bone dry, dark humor?

Sharrock: I guess it’s a reflection of my humor and imagination. I try to find humanity in moments of tableau and juxtaposing that human element with absurdism and satirical edge. I wanted to be critical of the Western kind of ‘othering’ toward refugees, and a lot of the humor then came from the fact that we’re always sharing the refugees’ perspective. So the absurdism was then drawn from instances like how absurd the cultural seminars were, or in what some of the locals would say to the refugees. These scenes were, in a way, quite easy to write because a lot of that was based on reality. Sadly, the way that Western countries receive and treat a lot of refugees is absurd and ridiculous. You can pull humor out of that in an odd, dark way.

Au: It's like highlighting what the realities are — it is how refugees are treated.

Sharrock: Yeah, and I think the humor is honest and truthful, it's not there just for the sake of being funny.

Au: Your film showcases Scotland in a very different way, as the whole film is set on this cold and desolate island. What was it like to shoot at that location?

Sharrock: I think every day was a massive challenge. There was never a day where it felt like “Oh, we got everything and it went perfectly.” By the end of the day, we were so exhausted from being battered by the constant wind. It was really difficult and it was the first film ever to be shot on that island. But at the same time, I'm very proud that we've got visuals of Scotland that have never really been seen in film before. It also really worked for the actors because everything that they were experiencing on the island was real, and they could feed that into their performances.

Au: I can imagine that recording sound must have been rough.

Sharrock: Oh yeah, that’s very true. We had a lot of ADR (automated dialogue replacement), and sometimes the sound guys would just give up and wouldn't record the sound. And I'd be like, “Why? We've got to record so that we at least have a guide track for when we're in the edit.” They would say “it’s no point, we're not going to hear anything.” I thought, “Are we going to get some unique sound of wind here that we can't get anywhere else?” And the answer is no. 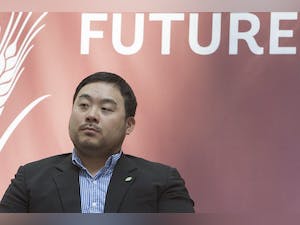