Scenes that Stick: The persistence of humanity in ‘Paths of Glory’

“Gentlemen of the court, there are times that I'm ashamed to be a member of the human race and this is one such occasion.”

This quote from Colonel Dax (Kirk Douglas) in Stanley Kubrick’s riveting World War I drama “Paths of Glory” is a perfect crystallization of the film’s driving message: the loss of empathy is the greatest casualty of warfare.

“Paths of Glory” opens with a meeting in which General Paul Mireau (George Macready) plots to take control of an amply-guarded German base called “the Anthill,” a seemingly impossible task that will result in a massive loss of French soldiers. He communicates the plan to Dax, a young colonel who always keeps the well-being of his soldiers in mind. We follow Dax through the trenches, seemingly unshaken by the sights and sounds of warfare. At no point, however, can Dax’s stoicism be confused with callousness. Predictably, the first line of attack fails; many men are killed, and those remaining retreat before even breaking through their own wire of defense.

The next day, Mireau calls for a court-martial in which three men from the regiment involved in the attack are to be tried for cowardice — the penalty is execution by firing squad. Dax acts as the men’s defense, but alas, the presiding judge has already made up his mind: guilty. Visibly disgusted, Dax protests the court’s authenticity, derides his superiors’ lack of humanity and delivers the line that opened this article.

The film’s conclusion never fails to move me to tears.

Following the execution, a distraught Dax is seen heading to his private quarters. Before entering, he pauses to observe some French troops who are gathered at an inn. The men are visibly drunk, whooping and hollering uncontrollably. The room grows increasingly raucous as a captive German girl in distress is brought in to entertain them. The man introducing her presents her like a circus animal, touching her freely and mentioning her “natural talent” as he motions degradingly toward her body. The clamor grows louder. All the while the camera alternates between the crowd and Dax as he looks on, nauseated by what appears to be another regular instance of barbarism brought on by the war.

Then, she begins to sing. At first, the soldiers hurl verbal attacks. “Hey, talk in a civilized language!” one yells. Quickly, though, they all fall silent. The camera pans back and forth between the face of the singer and those of soldiers. As the song progresses, the room begins to hum in unison with her. The shots of the girl give us a front-row seat to the performance; we see what the men see, and we are hard-pressed not to join in the humming as well.

Though she sings in German, the girl’s tune is a familiar one to the French troops, a point of commonality that transcends nationality. More and more soldiers join in the humming, and eventually, everyone in the room is shedding tears. For the first time since the start of the war, the men realize that the enemy they’ve been programmed to destroy is as human as they are. The camera cuts back to Dax, who, for the first time in a long while, smiles in relief at this rare display of sympathy and interconnectedness during the war.

Many war films, particularly in the U.S., relish in themes of ardent, unabashed patriotism. The soldier’s sacrifice is honored. Death on the battlefield is equated with valor. One’s nation is placed above all else. Kubrick’s ending shirks these tropes entirely.

He presents war as it is: a time of mass casualty. Images of smoking corpses and execution drive the film towards its emotional gut-punch of an ending. Kubrick desensitizes us to the violence of war through repeated exposure, only to have us examine our assumptions about its implications through one of the most serene scenes in the whole movie. It’s a brilliant subversion of expectations.

‘Voyagers’ presents a strange, unsettling view of the future 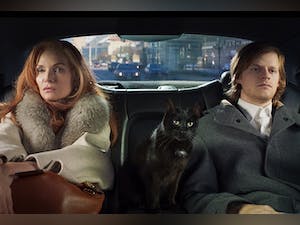 Grim and mystifying, ‘French Exit’ is a riddle of a film