Scenes that Stick: The eccentrics of sibling relationships in ‘The Meyerowitz Stories’

There’s a scene in Noah Baumbach’s “The Meyerowitz Stories (New and Selected)” that I always think about — a moment that only a person with siblings can truly understand.

“The Meyerowitz Stories” follows three siblings and their relationship with their father in adulthood. Danny (Adam Sandler) is the main character and his story takes up the majority of the plot, but his sister Jean (Elizabeth Marvel) and her story toward the end of this movie are what really fascinate me. It is a moment that finally unwraps the box that contains the relationship between these three siblings and their father.

The movie starts with the eldest brother Danny in the car with his daughter Eliza (Grace Van Patten) driving up a crowded 47th street in Manhattan. This scene always reminds me of my mom. She’s from the Bronx and learned how to drive there, so she comes with serious road rage and the amazing ability to parallel park, just like Adam Sandler’s character.

The scene ends with a dramatic jump cut from Sandler yelling at a car passing by to them arriving in his father’s beautifully decorated apartment in lower Manhattan. His father, Harold Meyerowitz (Dustin Hoffman) is a greying, irritable, classic New Yorker and a sculptor past his prime. They talk about his past works at the dinner table where they have been joined by Jean and Maureen (Emma Thompson), their stepmother. At this dinner, we begin to get a feel for the unusual relationship Danny and Jean have with their father as he makes passive-aggressive remarks about how none of his children were very passionate about the arts. This is also the first time we hear about the third Meyerowitz, Matthew (Ben Stiller). He lives in California and works in corporate finance, which Harold distastefully says he knows nothing about.

Fast forward within the film and Harold is riding the line between life and death in an upstate New York hospital. This is the first time all three Meyerowitz siblings are together in years. As they unpack out of their car to see their sick father, Danny recognizes an old family friend of Harold’s who is going to visit him on his deathbed. At this same moment, we see Jean start running toward the woods behind the hospital. Danny and Matthew look at one another, both confused, and follow her. Once they catch up to her, Jean explains why she acted this way. She shares a short and painful story with her brothers for the first time.

On a family trip many years ago, Jean was molested by her father’s friend. She explains to her brothers how she told her father what happened in the moment but was told that she would be okay and to go play and forget about it.

Her brothers are in disbelief and feel terrible that they did not know about this sooner. With their heads held low, they lean toward Jean to hug and comfort her. She says impassively, “I’m going for a smoke” and removes herself from the hug. This isn't because she doesn't appreciate their gestures of empathy; it's just exactly how siblings would react in this moment. This specific scene resonated with me because I shared a room with my sister for 18 years of my life and got a fist bump as a goodbye when she dropped me off at college. I love my siblings, but no we don’t hug.

Baumbach does an incredible job diffusing the tension of this uncomfortable conversation through the direction of their mannerisms. The shrug of Jean’s shoulders and the looks on Danny and Matthew’s faces is something I think about often. Frequently in movies when a character speaks about something that happened in the past, the movie cuts to a flashback of that very moment. A scene will play out in front of you of a younger actress playing a much younger Jean but Baumbach does not do that here. He lets the viewer hear Jean tell her story without you having to see what exactly happened because all that truly matters is what Jean has to say about it now. Elizabeth Marvel has the ability to show her discomfort toward the situation in her voice and the tension on her face making a flashback scene unnecessary.

Immediately following this moment, Danny and Matthew, out of pure shame for not being able to do anything sooner, destroy this old man's car. Jean exclaims, “I could smash every car in this parking lot and burn the hospital down and it wouldn’t un-f--- me up”.

Again, Jean has to remind them that there is nothing they can do now that will fix the past, but siblings will try their best regardless. I know mine would.

‘Nomadland’ is an authentic story for modern America 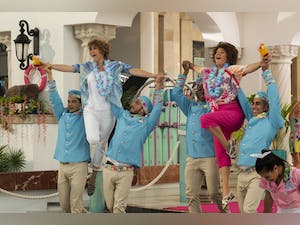