In the opening scenes of “Take Every Wave,” a new documentary film about big wave surfer Laird Hamilton, we see Hamilton checking out El Nino-influenced monster waves in Hawaii. He is preparing to surf some of the biggest waves he’s ever seen.

“I’ve been waiting a lifetime to ride this thing out here,” Hamilton says to a friend on the phone.

After this opening sequence, the film shifts to Hamilton’s life, chronologically. From his mother’s pregnancy with him in San Francisco, their subsequent move to Hawaii and her meeting the man who becomes Laird’s stepfather, surfer Bill Hamilton, on the beach on Oahu’s North Shore, Hamilton’s early life prepared him for a lifelong relationship with the sea.

The family grew, but it was not a harmonious household. His stepfather had a temper, and Hamilton was often getting in trouble at home and school. His sanctuary was the water.

“I found equality in the ocean. I used that as motivation,” he says in the film.

He dropped out of high school and split his time between a masonry job and surfing. Though Hamilton was a good surfer, he didn’t enter competitions. He saw his stepfather lose a contest once that he should have won, and got a “bad taste” for competing. He didn’t want to be judged.

The audience learns that Hamilton is a person always looking for the next wave, both literally and figuratively. They see a person who is constantly stretching and evolving. He’s the kind of guy who has done a lot of things, and seems good at almost all of them.

For example, he was scouted by famed fashion photographer Bruce Weber and tried modeling and acting, but didn’t enjoy the casting process. He was a professional windsurfer for a time, with big sponsorships. He was one of the creators of tow-in surfing, a method of big wave surfing that uses personal watercraft (jet skis or boats) to gain access to larger waves. He experiments with hydrofoiling, which is a method of surfing that adds a metal fin to the bottom of the board, holding the board above the water.

The film’s director, Rory Kennedy, weaves a human story while still making time for gnarly surfing footage. There is fun, archival footage of 1960s surfers living the counterculture lifestyle, as well as modern, beautifully shot surf video. The film includes interviews with Hamilton’s family and friends, including his wife, stepfather and brother. Their soundbites are remarkably candid, adding nuance and flavor to Hamilton’s interesting life.

“Take Every Wave” shows Laird Hamilton as a person with intensity, drive and a desire to always get another wave.

“There are a lot more waves I want to ride. I need to figure out how to do this and I only have so much time,” Hamilton says in the film.

This film was a bit of a departure for Kennedy, as she has a history of making socially-conscious documentaries. As for the inspiration behind the project, she told the Nantucket Film Festival she “was curious to explore what makes a person the best they can be.”

Kennedy shows that, behind Hamilton’s extreme self-discipline and drive lie darker characteristics. His wife, professional volleyball player and television personality Gabrielle Reese, said the couple almost got divorced at one point. She mentioned that Hamilton has a need for “tension” in his life. Perhaps that is why he’s compelled to seek serenity in the water.

“[The ocean] was the place I found true honesty,” Hamilton says in the film. “If you made a mistake, you paid, and if you did the right thing, you were rewarded.”

It’s funny watching great athletes at work – they make it look so easy. Surfing, like many sports, is incredibly strenuous but Hamilton looks graceful when he catches a wave. He’s one with the water. In many ways, Kennedy is like those athletes she so admires. She condensed numerous hours of footage, and an entire life, into a graceful two-hour film that flows, for the most part.

Some of the surf footage probably could have been cut. I responded most to the human elements in the film ─ stories of Hamilton’s childhood, analysis of his attraction to the sea, and his personal philosophies on life. During some of the surfing scenes, I felt like I was watching ESPN and wanted to change the channel, but, full disclosure: I’m not a sports person. I’m an indoors kid. The fact that I kept watching the film through all of the surf footage is a testament to Kennedy’s skill as a filmmaker, and Hamilton’s charisma as a subject.

The documentary closes with a long helicopter shot of Hamilton using his foilboard. He’s riding a huge wave in a relentless ocean that he’s not trying to fight, but to live with in harmony. 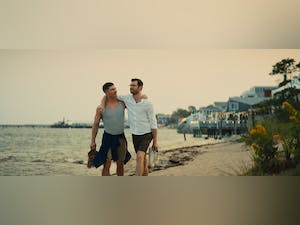