“Jake and Amir”: The end of an era 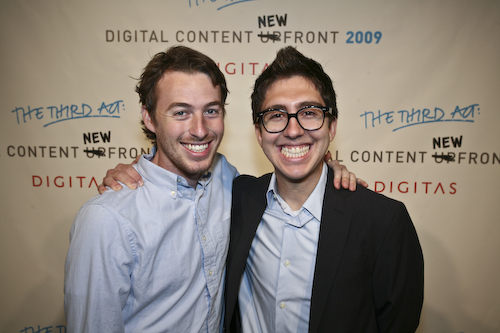 Eight years ago, when Jake Hurwitz and Amir Blumenfeld filmed themselves talking about global warming, the web series "Jake and Amir” was born. What started out as a side project has become a pillar of CollegeHumor, an online entertainment company and a pioneering web series. Looking back, that first episode is hilariously not funny. In the nearly 800 episodes that followed, however, the comedy duo has brought genuine laughter and unique insight on much less important subjects.

“Jake and Amir” is ending. The CollegeHumor stalwarts announced in late January that the final eight episodes would go up during one a week, starting Feb. 17. On their podcast “If I were You” Blumenfeld described the experience as bad as attending one’s own funeral. Naturally, the announcement came in the form of a seemingly spontaneous video, and it was a real tearjerker.

The first episode was full of meta-references. It appeared as if Amir and Jake are taking a page out of the “Seinfeld” script by pitching their show within their show: substitute NBC for CollegeHumor, Jerry for Jake and George for Amir, and it looks to be the story arc of “Seinfeld.”

As with “Seinfeld,” “Jake and Amir” is a show about nothing that covers just about everything. From a $1.5 million almond to some deadly ‘special’ brownies and a couple of accountants from space, they have done it all. The web series has also seen many guest appearances from the likes of Ben Schwartz, Hoodie Allen and Rick Fox. In the vein of “Seinfeld,” most fans would like to see some of these guests return for a last hoorah.

Viewers have fallen in love with Jake and Amir’s relationship, one of hate and love, respectively. The Ace and Jocelyn episodes were some of the funniest in the series and symbolic of their bond. Jocelyn (Blumenfeld) tried to force a connection with Ace (Hurwitz) but in the end, he didn’t have to because the two are soulmates.

Hurwitz usually plays the straight man, but when the roles are reversed, it produces some hilarious episodes. The two have discussed how they brainstorm ideas in each other’s characters, and it’s easy to see how the actors have become with their roles.

However, this is partly why the show is ending. In a recent podcast, Hurwitz and Blumenfeld talked about how they both want to pursue other things they are passionate about including writing for TV and film.

“Hopefully, people can think of ‘Jake and Amir’ as our first show,” Hurwitz said on the podcast.

What’s next for Hurwitz and Blumenfeld? The pair were asked to write a pilot for a show on TBS and have yet to hear from executives about filming it. There is still a chance that the show will come to fruition, but they both aren’t overly confident.

“Ever go on a date with a girl, and it goes really really well so you go, ‘Cool, we should go out again,’ and then she doesn’t answer you for a year?” Hurwitz said..

A comedy tour this summer is on the cards, but not much else is guaranteed for the comedy writers/actors. Regardless of what they end up pursuing, Hurwitz and Blumenfeld are proud of what they have accomplished and thankful for how successful it has been, they said in the same podcast.

“We thought we were going to be out of ideas after eight episodes,”Hurwitz said, “…and we did!” Blumenfeld added.