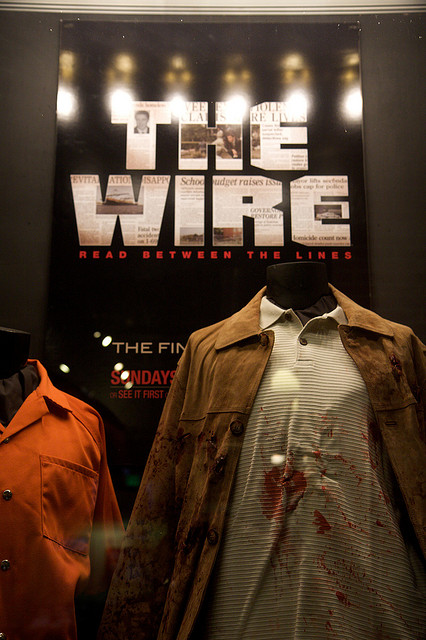 I'm gonna be honest, I tried really hard to make a connection to this week's batch of episodes and this weekend's viral video sensation "Too Many Cooks." No direct/clever similarity (besides the absurd number of characters) presented itself, so here we are. Onto my general conclusions about watching “The Wire” in 2014.


The Wire makes a point to contrast types of law enforcement, specifically the FBI with the Baltimore police department. The post-9/11 changes made to national security impacted all levels of policing, effectively or not. In "The Wire's" case, it's not.

According to “The Wire,” law enforcement is all about red tape, bureaucracy and pleasing the higher-ups. It's hard to think of a show on today that's making a similar political statement, when today's police procedurals are either syndicated to death or infused with some kind of supernatural or superhero element. They're just too much more formulaic than "The Wire" to make greater social statements or to even hold my interest. I was supremely interested in this week’s round of violent episodes, so here’s a quick recap of the action:

The Barksdale crew and a rival drug organization have a gunfight, which ends up killing a young boy who was inside a nearby house. The Baltimore police department carries out a large scale operation to arrest as many drug dealers/participants as possible, and Preston “Boadie” Broadus is brought in. Stringer Bell deals with the repercussions of the fight and contemplates making a deal to share territory. Brother Mouzone (Michael Potts, “True Detective”), a feared enforcer in the drug business, arrives from New York to handle the territory situation.

The Sobotka detail continues their investigation, and McNulty goes undercover to a brothel in an attempt to connect the location to the dead girls from the shipping container. McNulty's success at the brothel comes as a surprise to no one. Ziggy Sobotka begins selling stolen cars, as Nicky and Frank deal with other business. Ziggy's duck dies, and my heart shattered into a thousand pieces.

The beginning of Episode 10 made me smile so wide: I love a good montage that fades into source music, especially when Johnny Cash’s “Walk the Line” is used.

Ziggy Sobotka and Johnny “Fifty” Spamanto (Jeffrey Pratt Gordon, “Wedding Crashers”) steal cars and sell them to George "Double G" Glekas (Teddy Cañez, “Now You See Me”), who works for the Greek. After a dispute over Ziggy’s cut of the profit, Ziggy shoots and kills Glekas and wounds one of his employees. Ziggy is arrested, while Frank Sobotka attempts to run for union secretary again. I only just now noticed Ziggy's knuckle tattoos.

Major Stan Valchek expresses his frustration with the Sobotka detail’s progress away from Frank himself, while the detail involves the FBI with the case. Valchek continues to degrade the detail and insults Roland “Prez” Pryzbylewski, who punches Valchek and leaves the detail. McNulty and his FBI contact, Terrance "Fitz" Fitzhugh (Doug Olear, ) discover the Greeks of the Sobotka organization have an inside man at the FBI. Their smuggling business reaches across the country, and has been operating for many years. Members of the Greeks, aware of police surveillance, begin to dump the drugs and shut down the operation.