Bryce Harper, Daniel Murphy, Wilson Ramos and Stephen Strasburg will represent the Washington Nationals in the 2016 MLB All-Star game. The four selections tie a franchise record for the club.

Harper, while showing significant decline from his hot start to 2016, earns his fourth overall All-Star selection. For Murphy and Strasburg, this marks their second All-Star game selection, while Ramos earns his first All-Star nod.

Murphy leads the National League in batting average and hits, and has statistically better numbers than the fan-voted NL second base starter Ben Zobrist of the Chicago Cubs. Zobrist is one of five Cubs voted as starters for the Midsummer Classic.

Ramos is having a career year, currently batting .335 with 13 home runs, three home runs shy of matching his career high. 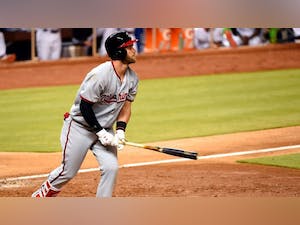