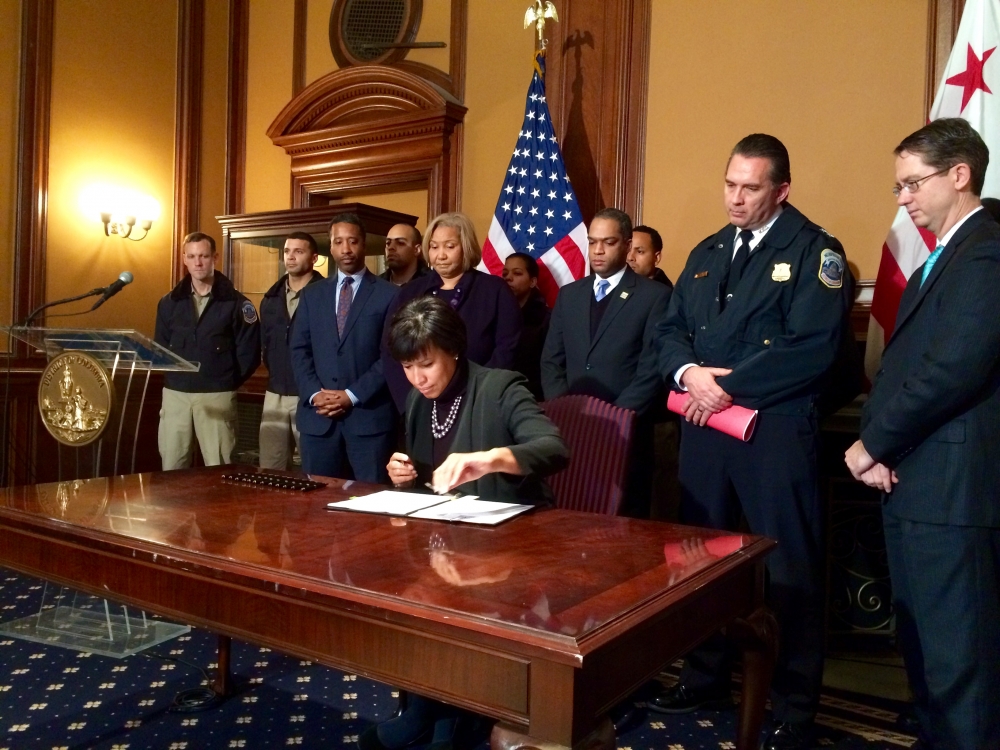 Mayor Muriel Bowser signed into law what she called the “most comprehensive, innovative [police] body-worn camera program in America” on Wednesday.

The regulations outlined in the law will govern the city’s program to equip 2,800 patrol officers with body-worn cameras by this summer. The first shipment of 700 cameras will arrive in February, Bowser announced at Wednesday’s morning news conference. The Metropolitan Police Department currently uses 400 body cameras for officers in the Fifth and Seventh Police Districts, which encompass large portions of Northeast and Southeast D.C., under a pilot program.

Five point one million dollars was included in the District’s latest budget to expand the program, and in late September the city announced it received a $1 million grant from the Obama administration for the program.

The mayor’s signature comes after months of debate. Without much precedent for police body-worn camera programs, lawmakers, activists and the Bowser administration clashed over how much access the public should have to footage captured.

The mayor’s original proposal would have kept most footage private, citing privacy concerns, but the final version of the bill passed by the D.C. Council allows most footage to be accessed through a Freedom of Information Act request.

Bowser said her administration would release any “video that I deem is of great public interest,” and added, “We are focused, of course, on anything involving a police shooting, in custody death, or any incident involving serious bodily injury.”

Subjects of a police camera recording will be able to visit their MPD station and review the footage free of charge, Bowser said. Those individuals can then even file at the same location a FOIA request for the video be made public after redactions.

“This program balances personal privacy with public transparency and accountability,” Bowser said. Recordings made in homes will remain private, in addition to footage of cases involving domestic violence, sexual assault and stalking.

One issue of contention that remained was a last minute amendment added to the bill before the council’s final vote on Dec. 15 which allows MPD officers to view the footage from their cameras before filing a police report — except in cases of a police involved shooting.

Ward 5 Councilmember and Judiciary Committee Chair, Kenyan McDuffie, opposed that addition, arguing it prevents the cameras from serving as an independent check on police officers.

“[Officers are] going to be writing reports that incorporate what’s in the body worn cameras, and intentionally or unintentionally filling in gaps where they exist,” McDuffie told reporters after the mayor’s bill signing.

Despite McDuffie’s disagreement over the late addition to the bill, he said that “on the whole I think the body worn camera program is a win for our law enforcement officers, it is a win for every resident and visitor to the District of Columbia.”