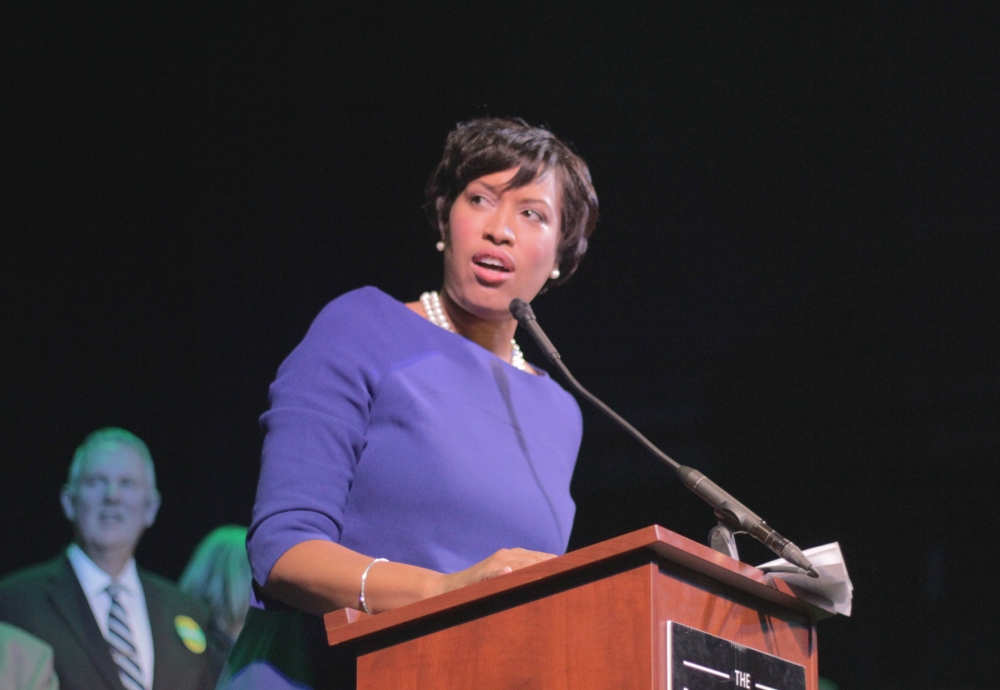 Despite negative reviews for her handling of crime, Mayor Muriel Bowser (above) has a 58 percent approval rating (Bryan Park/The Eagle).

A 59 percent rise in homicides this year has made crime the top issue on D.C. residents’ minds, according to a new Washington Post poll. Thirty-four percent of residents surveyed said crime and violence is the biggest problem facing the city today, ranking higher than housing costs, the economy and education.

One in four residents said they feel “not too safe” or “not safe at all” in their neighborhoods in the poll, which was released Wednesday morning, while just over half said they feel “somewhat safe.” The District reached a 6-year-high in homicides earlier this week and stood at 146 murders as of Wednesday afternoon, according to D.C. police.

The survey shows shifting concerns for D.C. residents and the extent to which the crime spike has affected the city. In 2011, when there were 108 homicides, a Washington Post poll found just 12 percent of residents thought crime and violence was the city’s top problem. Back then, far more important issues were the economy and jobs, which 22 percent said was the top issue, and the city’s schools, which drew the most concern at 25 percent.

Bowser on @washingtonpost poll. "I don't think it tells us anything that we didn't already know.. we're focused on crime & reducing crime.

Despite 63 percent of residents viewing Mayor Muriel Bowser’s attempts to reduce crime “not so good/poor,” Bowser retains a high approval rating — 58 percent approve of the job the mayor is doing.

Bowser faced criticism from Black Lives Matter activists in August when she unveiled her plan to fight crime in the District. Among the more contentious aspects of her proposal included more officers on the street and broader powers to search suspects on parole. Yet, 51 percent of residents surveyed said they think D.C. police’s response to the murder rate spike has been “not tough enough.” Only 5 percent said they think police have been “too tough.”

Police Chief Cathy Lanier also wins high favorability ratings from the poll, with 61 percent approving of the way she is doing her job. That comes after heavy criticism from the D.C. police union, which commissioned their own poll in August finding 97.5 percent of police officers surveyed expressed “ no confidence” in Lanier as the city’s top cop.