Capital Bikeshare could add 99 new stations within next three years

Capital Bikeshare could grow its bike-lending program with 99 new stations by the end of the 2018 fiscal year, in addition to expanding 21 existing stations.

The D.C. Department of Transportation released a draft development plan on Tuesday offering recommendations for the program’s future. The 143-page plan’s primary recommendation is to bring the service to more neighborhoods, in addition to increasing station density. Since the report found that most bikeshare trips last an average of 30 minutes or three miles, the plan suggests a number of new stations that are in close proximity to existing stations. 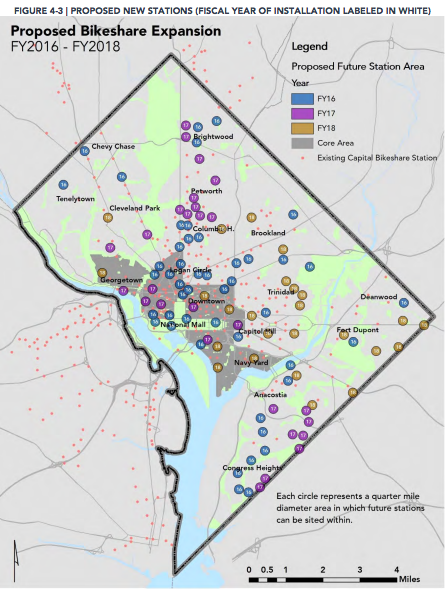 The program’s expansion also includes an abundance of new stations east of the Anacostia River and toward the border of Prince George’s County, MD.

“The Development Plan ensures that the District’s bike sharing program is on the right course for continued growth and financial sustainability,” the study’s introduction reads.

The study’s suggestions could go into effect as early as 2016, pending the DDOT’s approval. The 47 stations planned to be built next year would be focused in neighborhoods where demand is high, such as Columbia Heights and U Street NW, and especially in areas that are currently underserved.

The expansion project would cost an estimated $6.5 million, which includes the cost of new stations, new bikes, site planning and the costs of installation. Capital Bikeshare is seeking to fund the program through sponsorship, though it is unclear who those sponsors may be or whether this cost will affect ridership fees.

Since its launch in 2010, Capital Bikeshare has seen huge growth, from 114 stations at its start to 355 stations in 2015. As of September 2015, a collective 10.8 million bikeshare trips have been taken over the last five years, according to DDOT.