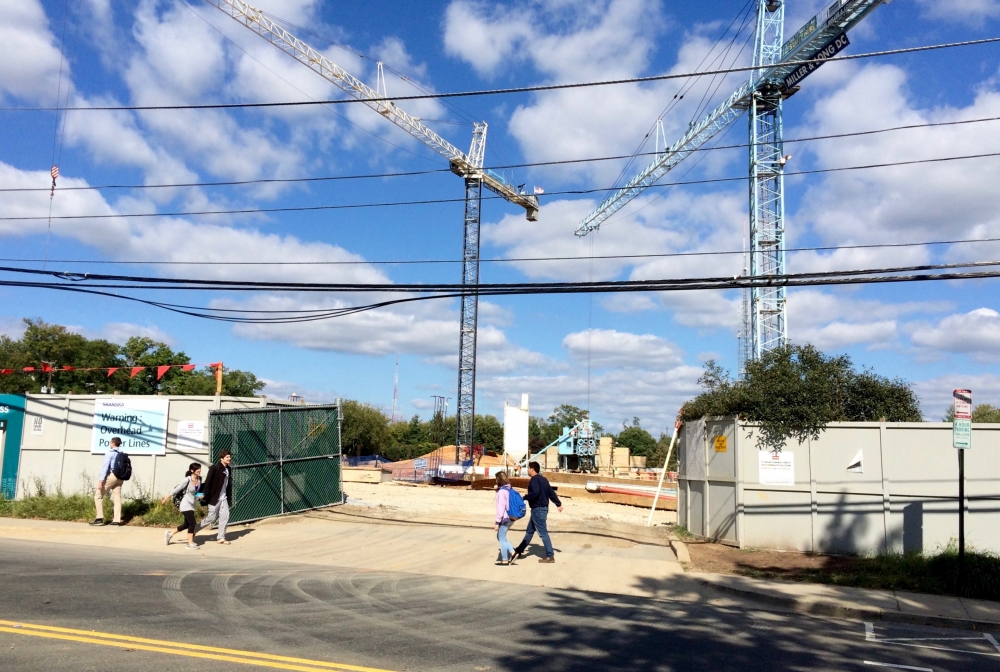 Despite AU arguing extending the work hours is necessary to meet the fall deadline — as a third of the work days this past spring and summer were lost due to bad weather — commissioners voted 5-1 to oppose the proposal. The ANC’s resolution said Saturday construction would “prove disruptive and objectionable to neighbors” and that even Saturday work wouldn’t guarantee the completion of the project on time.

“It’s incredibly important for us to claw back what we lost,” David Dower, AU’s assistant vice president of planning and project management, told the ANC.

AU is racing against the clock to open the three planned dormitories at East Campus by fall 2016, which would hold 590 beds. Under the conditions approved in its 2011 campus plan, the University is required to house 67 percent of its full-time undergraduate students on campus beginning in fall 2016. To expedite meeting that goal, Dower said AU will prioritize completing the residential buildings first and then finish the interiors of two connected academic buildings after the school year begins.

“It’s what we will have to do in order to make the schedule. The plan was actually to open [the buildings] all on the same time,” Dower said in an interview after the meeting.

But commissioners instead offered a different solution: AU should request the Zoning Commission push back that impending housing deadline to January 2017, to buy more time while continuing on its current 7 a.m. to 7 p.m. weekday work schedule.

This isn’t the first time AU has requested to extend work hours. Back in April, the Zoning Commission, with the support of the ANC, approved a work hours modification to allow the current weekday hours. The University requested the extension (previous hours were 7:30 a.m. to 4 p.m.) after construction on East Campus began late and snow storms impacted work.

The fate of the Saturday work hours proposal is now uncertain. Typically, the Zoning Commission will do what an ANC suggests regarding neighborhood topics such as construction. AU is asking Zoning to decide on their proposal at its Oct. 19 public meeting.

A frequent voice in East Campus discussions have been neighbors who live adjacent to the construction site, at the Westover Place townhouse complex. Larry Joseph of the Westover board of directors said his group supports the work hours extension, in order to finish the project as soon as possible.

“Any delay, even a minor one, stretches out the inconvenience to the community,” he said.

One Westover Place resident, Gerry Gallucci, said Joseph’s board did not speak for everyone in the community. He presented to the commission 48 signatures from neighbors who said they opposed Saturday construction. Gallucci also claimed AU doesn’t take advantage of the full 12-hour workday they currently have.

ANC commissioners also took issue with AU asking the Zoning Commission to waive the typically required public hearing on proposals. The University said waiting to hold a hearing would mean missing more Saturdays, but the ANC resolution called a hearing in this case “appropriate.”