An archival telling of the all-American sport on campus 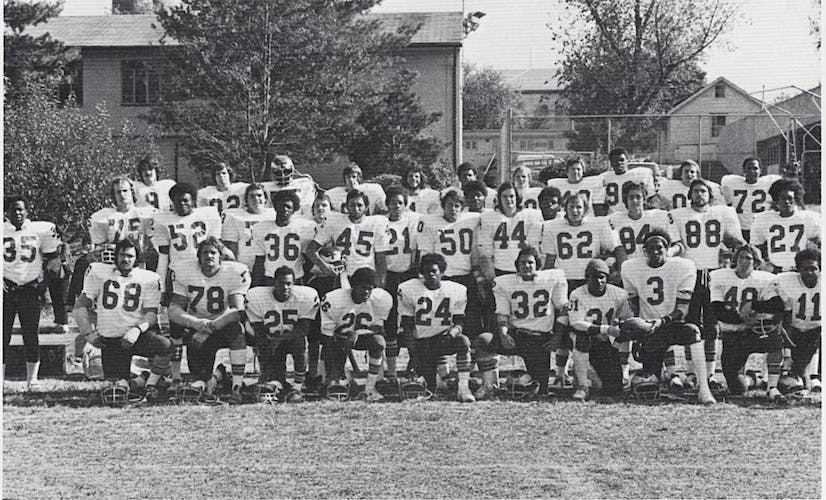 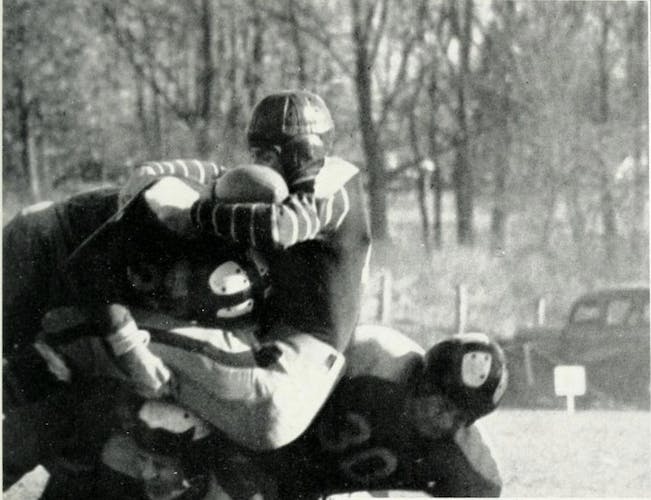 From the Newsstands: This story appeared in our December 2021 print edition. You can find the digital version here.

You can buy the shirt with that slogan on the back at the AU bookstore for $24. The gag is obvious — AU doesn’t actually have a football team, but the inside joke belies a lack of school spirit to many.

“There’s not a lot of school spirit,” School of Public Affairs junior Dylan Judge said. “It’s the culture of the school.”

Other students who spoke to The Eagle echoed a similar collective apathy toward AU athletics.

“I’m extremely indifferent,” School of Communication sophomore Olivia Tudor said. “I feel like a lot of people didn’t come here because of the school spirit.”

In fact, many students either think the Eagles never flew across the gridiron or only played a few games long ago. The story is much more complex: multiple teams wore the pads for AU, and unlike the slogan, they lost — a lot.

AU played its first two football games in 1925 against George Washington University and Emerson Institute — according to AU records — and lost both games.

The Eagles wore blue and orange, and they played in a ravine adjacent to the University President’s house that is now the site of the Wesley Theological Seminary in the 1930s, according to 2003 reporting from The Eagle.

Losses were a theme for the Eagles during their 1925-1941 existence. AU went 24-67-6, according to AU’s official record. Their best season was in 1926 when they went 4-3-1, and they never had another winning season. An analysis of the former AU yearbook — the AUCOLA (1927-1955) — reveals that the Eagles had three zero-win seasons, and were usually thoroughly outclassed by their opponents.

AU played 34 teams in its history and had a winning record against eight. Regular rivals were St. John’s University, Hampden Sydney College and Randolph-Macon College. The Eagles played the three schools 27 times and beat St. John’s once.

AU’s Achilles’ heel was their inability to score — the Eagles were shut out 32 times. The Eagles were outscored by their opponents by at least 30 points 24 times, proving their defensive ineptitude and offensive incompetence.

In the span of four weeks in 1928, AU lost to Gettysburg College 81-0, Catholic University 69-0, St. John’s University 63-0 and Gallaudet University 37-7. The Eagle commended AU for its “spectacular tackles” in the recap of the humiliations.

Despite the losing, AU’s actual record is disputed. The Eagle’s records prove inconsistent over the years, and AU has no official record book for the football team. The only source that kept regular records was the yearbook.

What is undisputed are the interesting people who played and coached for the Eagles. Fullback Tom Sawyer played for AU during the 1926-1927 season. He was a two-sport star, as captain of the basketball team in 1926, and captain of the football team in 1927. However, Sawyer’s successful career crashed and burned soon after.

After just two games, Tom Sawyer and three other players were suspended from the team for “training violations,” according to a 1927 Washington Post article. While no official reason was given, the Post reported the four players had been involved in a car crash after driving home from a party. The suspensions forced AU to cancel its game against William & Mary and AU finished the season 1-5. Sawyer withdrew from AU soon after, according to The Eagle.

There was also Gus Welch who coached AU from 1937-38 and compiled a 2-10-1 record. Welch had a strong resume as a player, suiting up for coaching legend Pop Warner and playing alongside football great Jim Thorpe. Welch was hired to turn AU’s fortunes around, but he went down in AU lore for the many stunts he allegedly attempted as head coach.

In 1938, The Washington Post reported that Welch tried to start a woman as a placekicker for the Eagles, but AU’s dean of women denied the idea. Welch was also known for his “30-second football” lectures to new players before throwing them into games for the first time.

In the same article, the Post also alleged that Welch, fretting how small his teams were, dressed cheerleaders and students as players to fool opponents into thinking he had more players than he actually had. In an interview with The Eagle in 1959, Stafford “Pop” Cassell — whose name adorns Cassell Hall and who played and coached for the football team — quoted Welch allegedly saying, “The only way for us to get a crowd is to play at the half of a Redskin game.”

The team didn’t improve during Welch’s tenure and he resigned after the 1938 season. With the onset of World War II, the University eliminated the football team because there weren’t enough men on campus to field a team, The Eagle reported.

The University considered reviving football, but AU deemed it “impossible” in 1959, and an official team has never suited up for AU since.

Despite this, AU students were not done with the gridiron.

Upon arriving as a student at AU, Terry McLarney wanted to keep playing football. He played at Wheaton High School in Maryland, and then went to Jacksonville State University to begin his college football career. After a year, he transferred to Montgomery College to continue playing football. However, academic pursuits led him to AU in 1973, McLarney said in an interview with The Eagle.

Now a Lieutenant in the Baltimore Police Department, McLarney said that he didn’t know that AU had a club football team when he got to campus. But after a chance encounter at the cafeteria on registration day, McLarney joined the team and played center and guard from 1973-74. McLarney said that the team was a tight-knit group with a sense of camaraderie.

The team played at Reeves Field and went 5-2-1— according to the AU yearbook— and McLarney said the team was invited to play a bowl game in Oswego, New York, which they lost. Despite the success, McLarney wasn’t blind to the apathy the student body had for the team.

“No one really cared that there was a football team,” McLarney said. “However, when we would play a home game and walk over there in full gear … People would come out and watch. Once we were walking over and I heard someone saying ‘we have a football team?’”

1977 alumnus Lowell Lease laughed when he heard the story.

“I don’t know if anybody had realized that there was a football team,” Lease said.

Lease played football with McLarney in high school and said McLarney had told him about the club football team. When he came to AU in 1974, he signed up to play as a defensive end.

Lease played one year for the Eagles — a hand and head injury cut his career short — but he said he liked the team atmosphere.

“It was a real cross-section of guys,” Lease said. “The chemistry was good, we all got along and did really well. We had good cohesiveness in defense and offense and it was a lot of fun.”

McLarney and Lease’s teams only got to suit up after years of grassroots efforts to bring football back to AU.

In 1965, a group of students created the AU Football Club to promote tackle football’s return to campus, and after four years of advocacy, the AU student government, known as the “Student Confederation” at the time, pledged to fund the team, according to The Eagle’s reporting in 1969. The club team played from 1970-1976, but its tenure was fraught with controversy.

Relations between the team and the SC were tense from the beginning. According to The Eagle in 1970, the two sides disagreed about cost. The comptroller in 1970 suggested the club football team was not forthcoming with the actual cost of the team and called the pro football faction “a little tribe of beerdrinkers.”

The two sides continued to disagree on the club’s expenses, and The Eagle frequently reported the student government repeatedly charged the team with overspending. Neither Lease nor McLarney remembered the debate, but the money dispute ultimately doomed the team.

In 1973, an Eagle investigation found that the club was nearly four thousand dollars in debt. In 1974, SC said the club owed a travel agency $1,800 and $1,000 to a motel in Oswego for the game, according to The Eagle’s reporting in 1974. McLarney said he didn’t remember the team being in debt or having any problems with the Oswego trip.

The team held fundraisers to try and keep the club afloat, including a Las Vegas night and an “X-rated movie night” that turned a profit, according to a 1974 Eagle article.

The fundraisers didn’t raise enough funds and SC refused to fund them in 1975, according to a 1975 Eagle report, spelling the end of the club football team.

The 1976 season was football’s last gasp at AU, and the team was disbanded. Football had finally faded from AU for good.

Despite this, both Lease and McLarney said that their time at AU has stuck with them in their respective careers and that a football team could give the school some much-needed spirit.

“You go through life and there’s so many parallels,” McLarney said. “You reap what you sow, if you don’t work out, you don’t go practice, you’re not going to be decent and gut it out during tough times. The teamwork and caring, and all that kind of stuff — for me, it was football.”