From hunger strikes to sit-ins, young activists are working towards climate justice and making strides 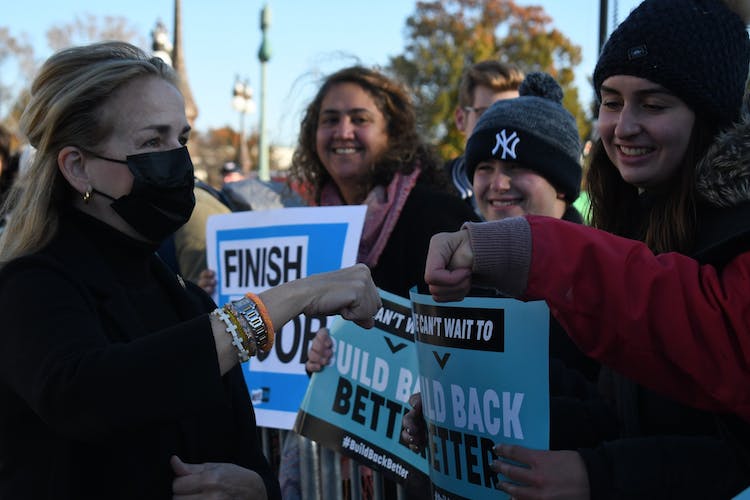 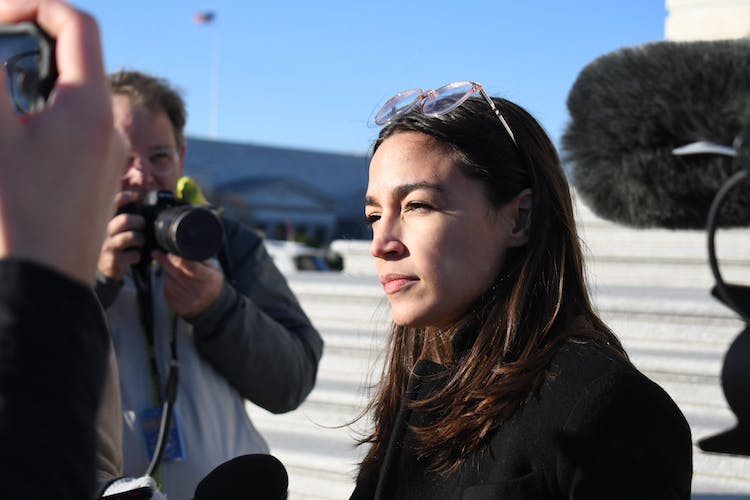 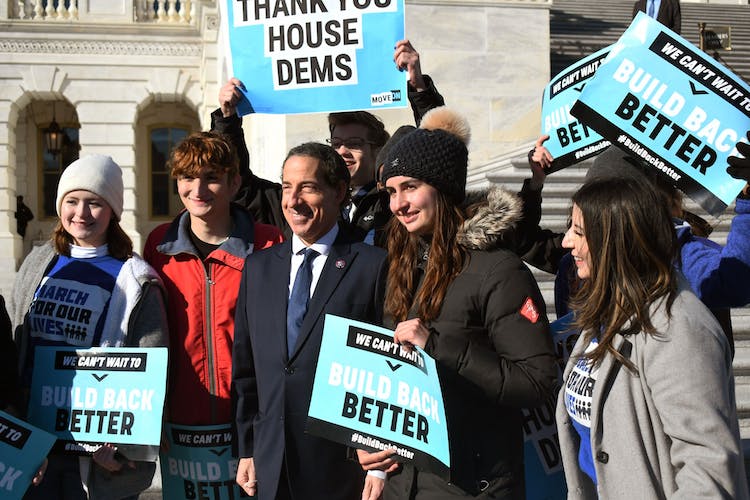 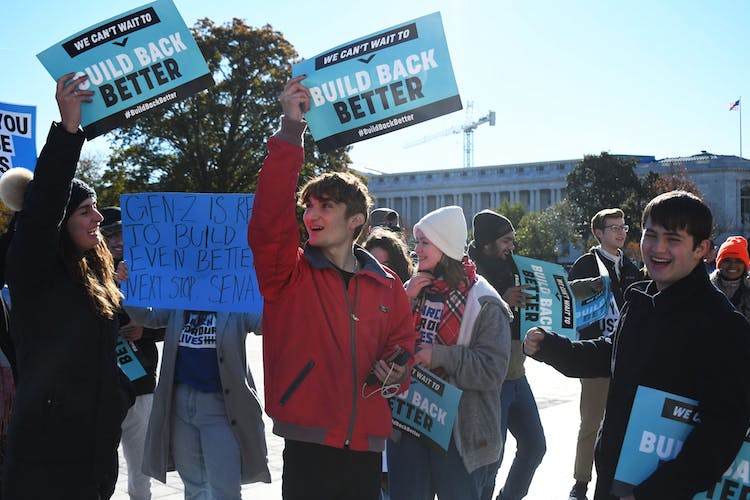 On Nov. 19, the Build Back Better reconciliation bill passed in the House of Representatives. For American University’s Sunrise chapter, who spent over a month campaigning in its favor, it was a victory a long time in the making.

In October, a group of five young activists from Sunrise National began a hunger strike that would last two weeks. Their motivation for this action was simple: demonstrate the drastic nature of the climate crisis.

Jamie Minden, a freshman and organizer at the Sunrise AU, said that hunger strikes historically make a huge difference in important movements. For Minden, and other climate activists, this is one of those movements.

“It’s time for extreme measures like hunger striking to happen because change just isn’t happening at the rate that it needs to,” Minden said.

The five activists that participated in the hunger strikes did so until they were at risk of permanent damage. A number of the activists were hospitalized throughout the two-week strike.

Salvatore Cottone is a freshman organizer for Sunrise AU and was involved in the hunger strikes.

“I was sitting down right next to Abby, who was one of the hunger strikers, and when she was speaking … she was like, ‘I don’t want to have these thoughts of having to witness my family have to prepare evacuation routes from our own apartment building,’” Cottone said about hearing the hunger strikers speak about their motives. “I immediately was brought to tears just by that, because these people genuinely do care about our climate.”

Sunrise AU assisted the hunger strikers by bringing protesters to the strikes.

“It was almost a coalition effort between Sunrise AU, Fridays for Future DC and then Sunrise National,” Cottone said. Sunrise AU’s participation centered on bringing attention to the hunger strikers and the climate crisis in general.

“Moving here from California where the wildfires are, I’ve really noticed that people have a much easier time, forgetting how bad the climate crisis is here. Especially in D.C. where politicians can take a vacation when things get bad,” Minden said. “I think this action really draws your attention to how extreme the crisis is, and reminded people [of] the human cost of this crisis.”

AU Activists and Next Steps

For the last week, Sunrise AU, along with Sunrise GW, has hosted a series of sit-ins outside of Congress to demand the House pass the Build Back Better Act.

“It definitely makes it feel like there’s an impact because [members of Congress] notice us,” AU freshman Sole Meade said. “And then talking to some of the representatives that we have spoken to, they say like, ‘thank you for being here, like you’re helping.’”

Students said they felt that their role at the sit-in was to hold representatives accountable for the promises they made regarding the climate. Additionally, students emphasized big corporations are responsible for the severity of the climate crisis. Minden pointed out that the term “carbon footprint” was coined by big oil companies to guilt people as a way to divert blame for the climate crisis. Minden also said that it’s important to center the idea that individuals are not responsible for climate change in activism.

“We’re really just trying to center the conversation around, this is something that you have to spend money on, you know, for survival of humankind,” Minden said. “You can’t skimp now, this is where we have to be spending the money … economists have run the numbers and climate change will cost an insane amount of money and human life.”

On Nov. 18, the day before the bill passed, student protesters had a meeting with Rep. Ayanna Pressley (D-MA) where each student shared their personal connections to climate activism. They also briefly met with the Congressional Black Caucus.

“It was really important for us to be there all week, no matter what the weather conditions were. So starting Monday and Tuesday, we were out there battling temperatures in the 30s and 40s,” Joel Ploski, the press coordinator with the sit-in, said.

Organizing these protests is a huge sacrifice for the activists, many of whom have been missing classes to attend the sit-ins.

“They say a lot of things when it comes to environmental activists that we have some of the worst mental-health out of all activists,” Cottone said. “For me, I don’t really care about what I’m doing academically if it means that my future isn’t going to be worth living.”

The activists hope to send the message to Congress that the sacrifice is necessary, and that it’s their job to do something about it.

“I want them to just see that the youth are willing to work and stand up for what they believe in. You hear so often, ‘this is the generation that’s gonna change the world, these kids are gonna change the world’. But then they’re not willing to listen to us,” Suzy Pranger, a senior at AU, said. “And I just hope that they see us and are willing to listen to what we’re saying … we’re not just an idea. We are the youth.”

The Build Back Better Act

Thursday night, Sunrise AU protestors waited out in the rain anticipating the House vote on the Build Back Better Act. Instead, Rep. Kevin McCarthy (R-CA) spoke for eight hours and 32 minutes, utilizing the “magic minute” rule, delaying the vote for the bill until the following morning. While McCarthy delivered his record-breaking filibuster-style speech to the house floor, dedicated AU students held their signs, continuing to advocate for the bill’s passage.

“The moment we heard McCarthy start speaking, we were like, ‘okay, it’s one hour of speech,’ and then we found out it was [almost] nine hours,” Cottone said. “We had to stay here in the cold … it just made us realize we’re gonna fight this.”

Friday morning, AU students showed up again to continue the push to pass the Build Back Better Act. This time the bill passed by 9:46 a.m. As the final necessary votes in support of the bill came through, students cheered for victory.

When news officially broke that Build Back Better passed the House, representatives came out of Congress, eager to meet with the activist group. Rep. Jamaal Bowman (D-NY) spoke to the group, thanking them for their support.

“Thank you for what you do, thank you for being here, spreading the good gospel to your community,” Bowman said. “I was depressed all week, I’m not depressed anymore just because of you all.”

“This is not the only thing we have to do, as we know.” Bowman continued. “We have to keep the pressure on the Senate so the Senate passes it, and then we’re back to the drawing board here.”

Since the bill has passed in the House, the fight for Sunrise AU activists continues as it makes its way to the Senate. Sen. Joe Manchin (D-WV) and Sen. Kyrsten Sinema (D-NY) have previously expressed their dissatisfaction with the reconciliation bill, taking issue with the price tag. Both are key votes to obtain a simple majority in order to pass the bill in the Senate.

“We’re going to be out here throughout December, continuing, but this time on the Senate side to make sure that we get this bill passed so that we can fight for people that really need this funding,” Ploski said.

'We want to help them reach their fullest potential': AU athletics hosts clinics for National Girls & Women in Sports Day