AU students gather at 57th anniversary of the March on Washington 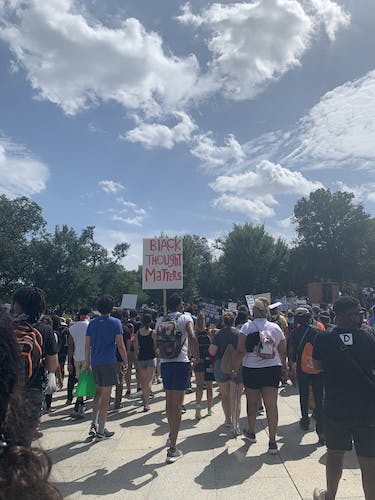 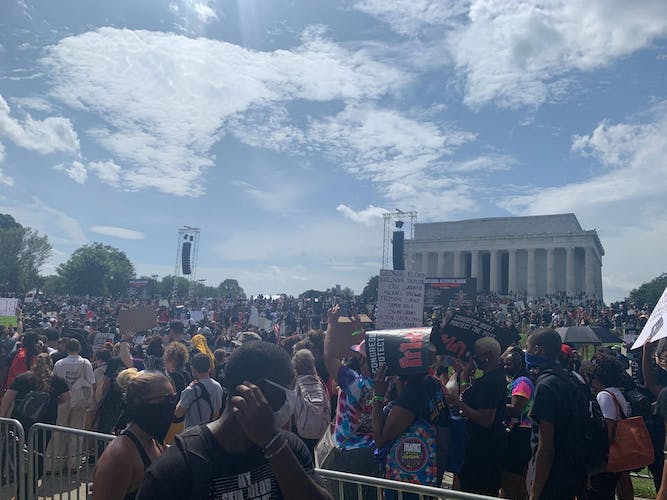 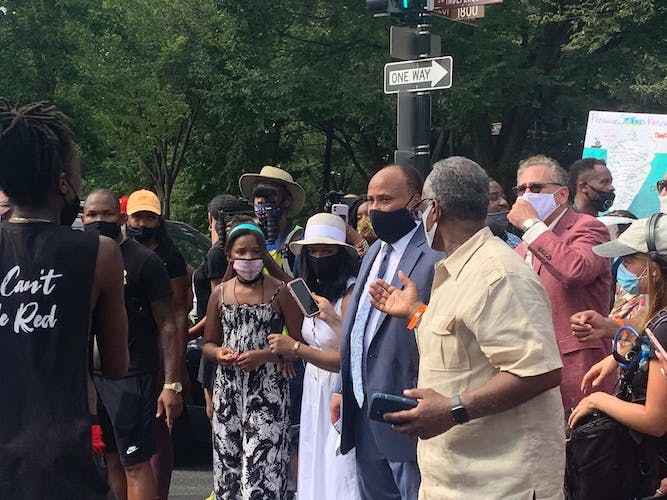 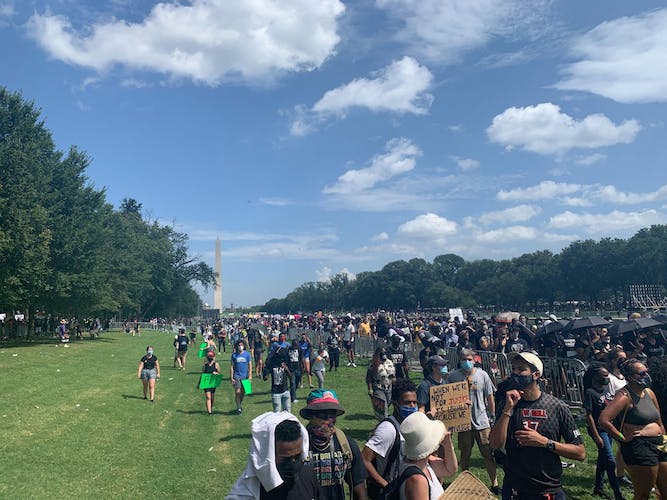 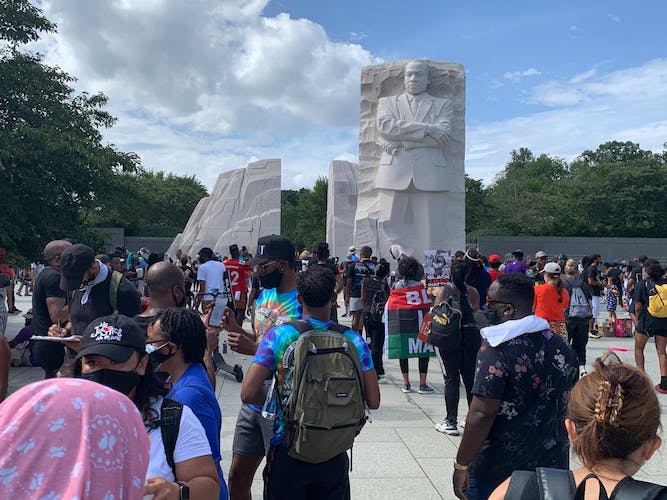 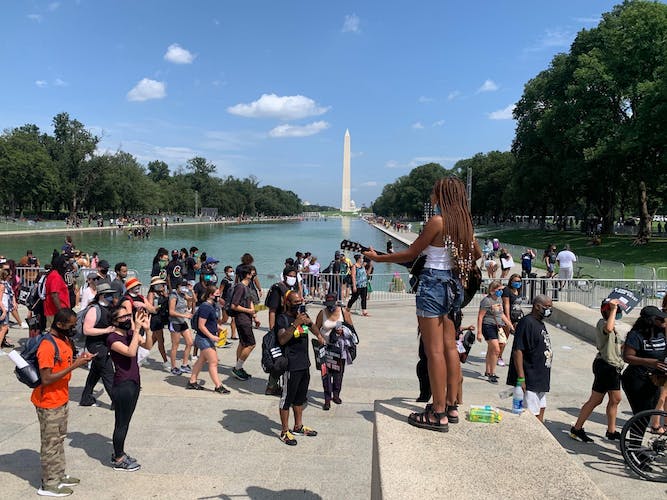 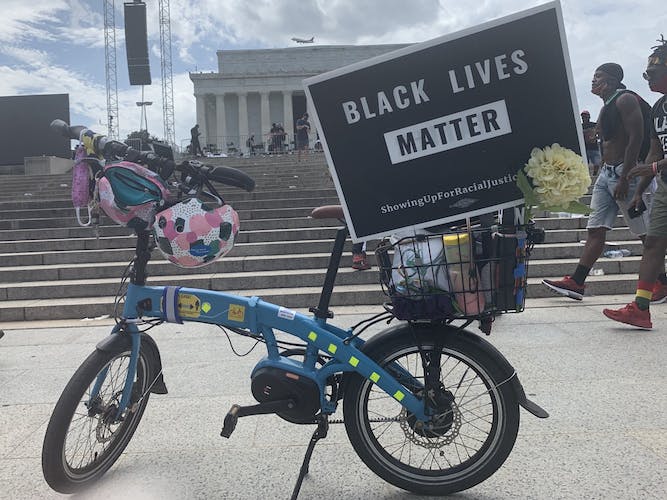 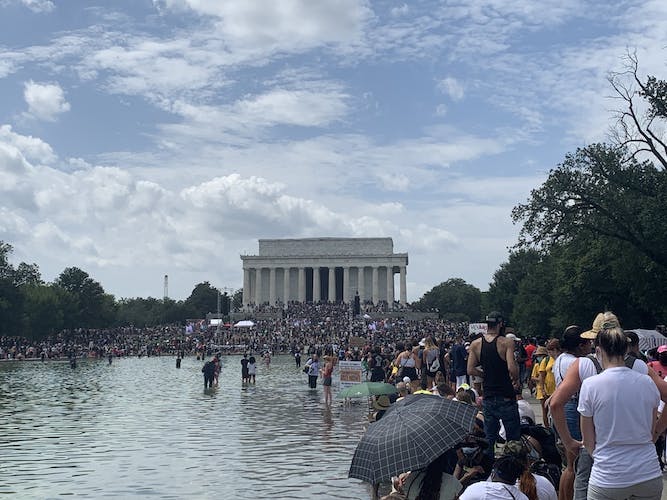 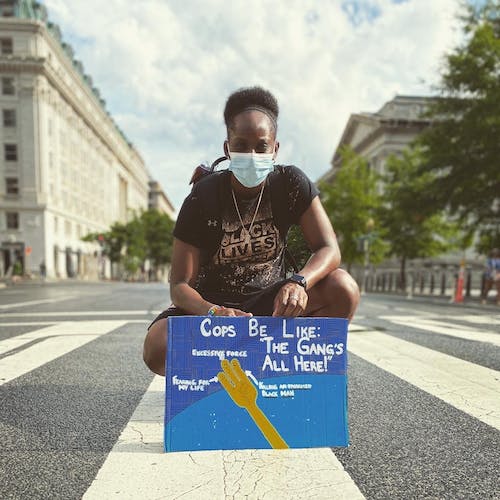 Almost 30 years ago, Bijan Moore’s mother attended protests in San Francisco following the savage beating of Rodney King by four Los Angeles Police Department officers. Now, the School of International Service senior is participating in another set of protests, ones he hopes will lead to better awareness, representation and protection for Black people across the United States.

Moore was inspired to be at the March on Washington on Friday with other American University students, he said, where thousands of protesters gathered to hear from leaders like Martin Luther King III, the Rev. Al Sharpton, and family members of Black people killed by police in the last decade, including those of George Floyd, Breonna Taylor and Eric Garner.

“They had speakers of all ages, of all kinds of social classes and kinda just from everywhere,” Moore said.

The march, beginning with speeches at the Lincoln Memorial and culminating at the Martin Luther King Jr. Memorial, was a reflection of the historic event 57 years ago, when King gave his famous “I Have a Dream” speech at the height of the civil rights movement.

AU students attended the march and associated protests, often traveling in groups. The March on Washington also had a virtual format, through the NAACP’s website. College of Arts and Sciences senior Edmée Marie Faal called the march an opportunity to recommit herself to the cause of civil rights and justice that has been a throughline this summer.

In addition to Taylor and Floyd, this year has been marked by the killing of Ahmaud Arbery in Georgia and the shooting of Jacob Blake in Wisconsin.

“I should have been in class, but I really feel like some things are really important that you show up for … and this was something that I wanted and needed to commit myself to,” Faal said. “It was great to see such large numbers out together, all for this one purpose, especially because there’s been a quite noticeable decrease in people coming out to protest recently.”

Faal was joined by an AU alum who traveled from Sacramento to attend the march, along with another friend from Boston. They managed to find a spot on the steps of the Lincoln Memorial, just below the speakers, and Faal said that hearing Sharpton and Martin Luther King III speak was an experience she is still doubting could actually have been real.

Both Moore and Faal expressed concern that, despite AU’s propensity for political involvement, the label of “politically active” has become performative over time.

“AU needs to evolve and think about the steps after going to a protest, and students need to think about, ‘Okay, I’m going to go to this protest, but what am I going to do after?’” Moore said.

Faal agreed, encouraging students to get involved with grassroots organizers around the DMV, examine their biases and role in maintaining systems of oppression, and spread information and awareness when direct protest isn’t an option.

Performativity isn’t just a problem among AU students, Moore said, pointing out how the actions of AU’s administration are often more for show than truly impactful. He said diversity scholarships are a prime example of the administration’s willingness to help marginalized and underserved communities only so far as it makes them seem caring and aware.

Follow-through is a must, he said, citing the coronavirus pandemic as another issue that disproportionately affects Black people. Moore worried that the cancellation of on-campus housing, with the exception of emergency housing, would worsen the situation, as he and many other Black students he knows depended on it when they were younger.

AU spokesperson Lisa Stark told The Eagle in an email that AU is working hard to offer students financial aid through both scholarships and other merit-based financial awards. The new AU District Scholars program recruits “high-performing, high-need students,” from D.C. public and charter schools, she wrote, aligning with AU’s efforts to support and give back to the District.

In addition, Stark highlighted the success of the Frederick Douglass Distinguished Scholars program, which is designed to support a diverse group of students with interests in social justice, and wrote that AU increased its financial aid by $13 million this year.

“Our financial aid efforts run deep, and we are dedicated to ensuring that they further our mission of advancing equity and creating a diverse and inclusive community,” Stark wrote.

Stark also addressed the concerns of students over the lack of affordable on-campus housing for the fall semester, writing that AU’s decision to go fully online was motivated primarily by health and safety concerns.

“We understood this could have a disproportionate effect on some students who may not have options other than university housing,” Stark wrote. “That is why AU recognized the necessity for, and is offering, emergency student housing for those who need it.”

Mackenzie Meadows, the president of the Black Girls Vote collegiate chapter at AU, planned to join Water for Justice, an organization that passes out water bottles to protesters in solidarity, but was unable to attend due to capacity. Water for Justice is run by the family of BGV member Folashade McMullen.

Protest indicates younger generations are fired up; voting is next priority

While Meadows was unable to attend the March, she witnessed its impacts in the D.C. community.

“I definitely think that this will have a ripple effect, and that we will definitely see impact and change in the near future,” Meadows said.

Meadows also saw photos of the march on social media and thought they showcased how people feel empowered to show public support for these issues. She even saw some young children and parents creating their own protests, which exemplifies how large-scale the Black Lives Matter movement has grown.

“The original Black Lives Matter was kind of, I guess I want to say niche,” Meadows said. “Only certain groups of people literally supported that, and now it's kind of a widespread work that lots of organizations and companies even in the area I’m living in, Columbia Heights, are showing support of, which I would never expect them to.”

Meadows said that, while BGV’s primary focus is on the power of voting, its message emphasizes the understanding that a combination of voting and protesting is necessary.

“Voting is not the end all be all; it is one step to a bunch of steps in achieving these common goals,” Meadows said.

AU NAACP said that the community was excited to make change and happy to see people motivated by the times we’re living in.

Students weren’t the only AU community members at the march. Monica Morin, senior administrative assistant in the Department of Critical Race, Gender and Culture Studies, also came out to the march to show her support.

“What really got me out of the house was wanting to come and hear the voices of those who lost family members directly,” Morin said. “That’s what really calls me to action, wanting to respect their time and their moment and their heart and their pain.”

Morin said she feels thankful that she was able to take the day off from work to come out and support the movement.

“I’m just motivated to let Black people lead and come here to hear their voices and just, you know, show up,” Morin said.