The concert promoted her new album “Was It Even Real?” released on April 26

American singer-songwriter Olivia O’Brien performed at Union Stage on April 13 to promote her new album that was released on April 26.

The 19-year-old artist explores songs about her heartbreaks and a pursuit for self-love in the new album, “Was It Even Real?” During the concert, she sang older hits like “Trust Issues,” which she wrote when she was 15, and “hate u love u.” The audience sang along to  “Tequilawine,” an upbeat electronic number about O’Brien running into a boy at a party who has hurt her in the past. Instead of focusing on heartbreak, she chooses to have a fun time.

While some of the songs O’Brien performed took a lighter approach, she wasn’t afraid to tackle the difficult side of mental health issues in her music. One of her most notable performances  of the night was “Empty,” which describes a time when O’Brien was in a dark place in her life and was caught between wanting to live and die. The raw emotion of her voice during the performance genuinely demonstrated the great meaning this song means to her.

After performing several songs in a row while being “in her feelings,” O’Brien surprised fans with a short cover of Hannah Montana’s “Nobody’s Perfect” to lighten up the mood.

Other highlights included a performances of “Just a Boy” and “No Love,” where she distanced herself from the topic of relationships. In the first song, she rejects a boy saying that she would rather be alone, while the second doesn’t deal with relationships at all. Rather, she sings about the competitive atmosphere of Los Angeles. O’Brien said she was happy that fans knew the words to the song since it may not be relatable to those not from LA.

At the end of the night, O’Brien delighted fans with an encore of three songs: “Just Friends,” “We Lied To Each Other,” and “Love Myself.” “Just Friends” is a bittersweet track about two people unsure about entering a romantic relationship or staying platonic. The performance had a lighter pop feel accompanied only by light plucking on the electric guitar. O’Brien said that she might mess up several times while playing since she’d only been playing the instrument for seven months, but she hardly made any errors.

O’Brien finished the concert on a positive note with her song “Love Myself,” which encouraged audience members to love themselves first before entering into any romantic relationships.

Through her performance, O’Brien proved that her music is the real deal. Not only is she transparent about her struggles through her song lyrics, she also doesn’t hold back her emotions in her live performances. Her music aims to erase stigmas surrounding mental health, while spreading the positive message that it’s okay not to always feel okay.

“Was It Even Real?” released on Friday, April 26, and is now available for streaming on Spotify and Apple Music. 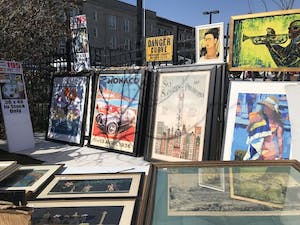