As Board of Trustees meets, students protest tuition increases 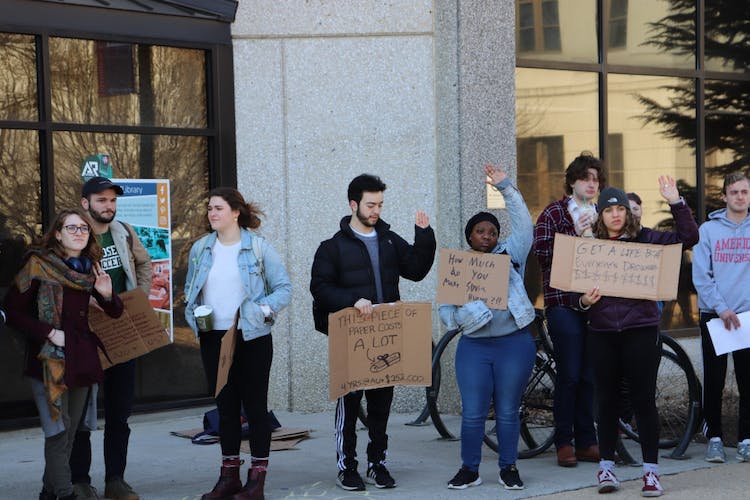 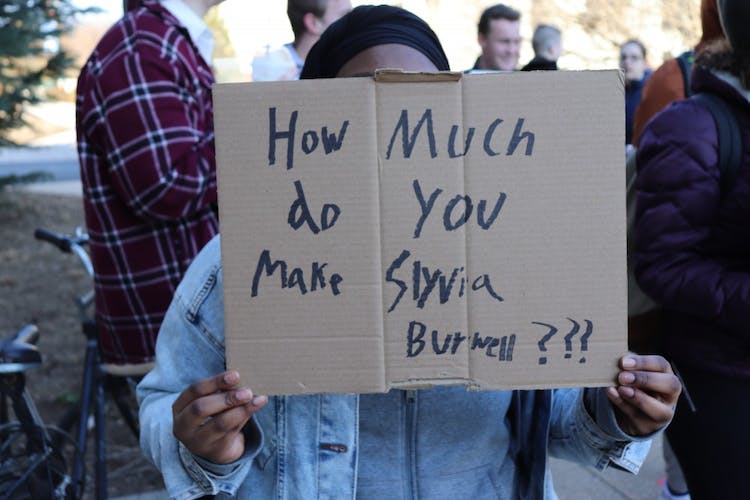 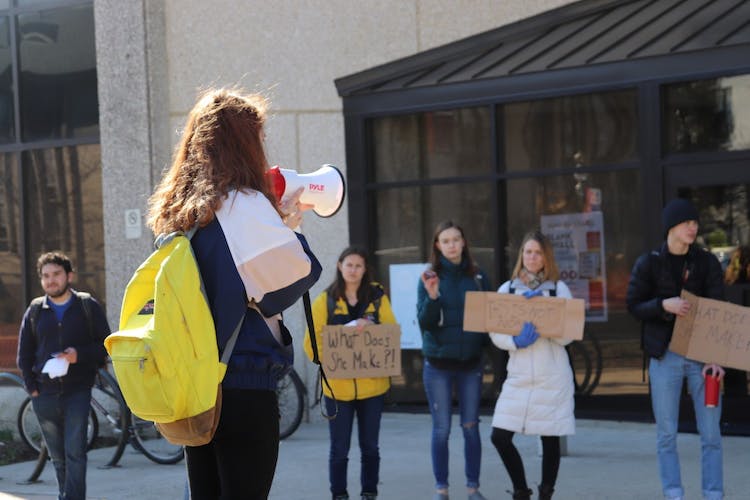 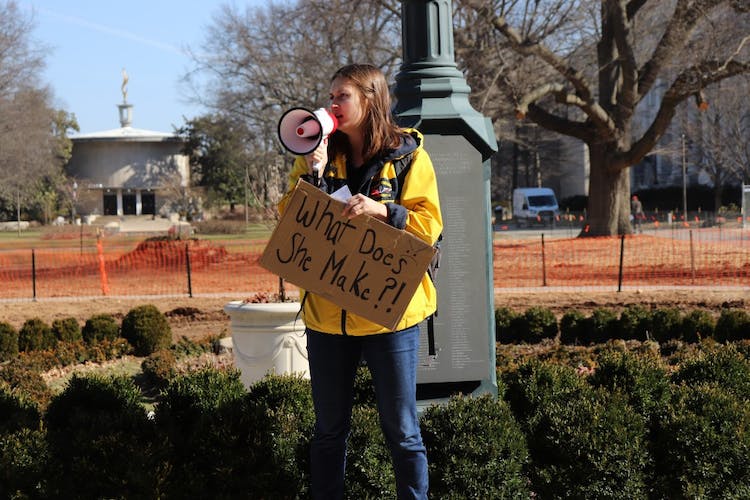 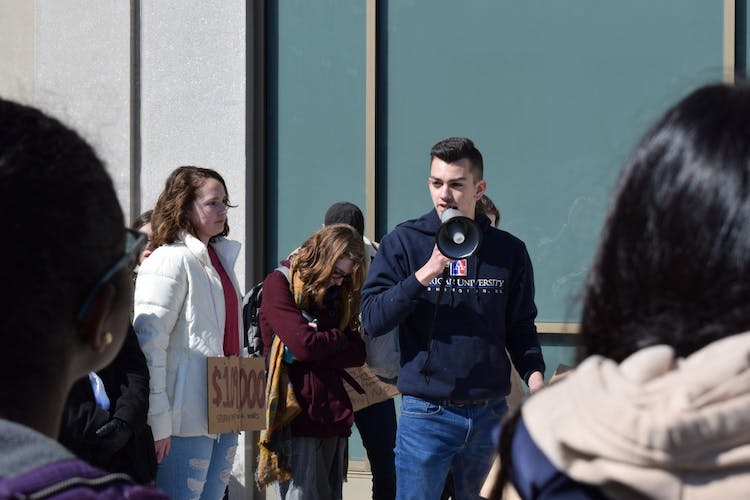 As the Board of Trustees met to finalize the budget for fiscal years 2020 and 2021 on Thursday, AU students protested proposed tuition increases and the lack of transparency when it comes to financial matters.

About 30 students gathered in front of Bender Library at 10 a.m., holding signs expressing their frustration with the increasing cost of education at AU and not knowing where their money is being spent.

Junior Mitchell Lenneville, among other students, originally organized the protest over the increasing cost of tuition as well as proposed changes to meal plans that would have increased the minimum costs for students. The University later announced it would not be changing the plans next year.

Lenneville continued with his plans for the protest because he believes student activists need to encourage the administration and board to listen as well as to take concrete action.

“We know the restrictions they [board members] face,” Lenneville said. “We don’t need good words or good faith, we need action.”

Sophomore Lucas Trevor came out to the protest because he "saw the Facebook event and it's kind of ridiculous how much we all pay annually for crappy food and crappy living." pic.twitter.com/jk1k1ogKQl

In March 2017, the last time the board met to approve the budget, the members decided to increase the tuition by four percent for fiscal years 2018 and 2019. Protesters worried that the percentage will only increase.

Freshman Nate Keller said the tuition increase is not fair to students who are typically disadvantaged, such as people of color or members of the LGBTQ+ community. He said the University needs to find ways to make the cost sustainable by reducing spending and other costs.

“This is not just an American University thing,” Keller said. “Even in state schools, $25,000 [in] tuition or total cost even isn't realistic for people in poverty or for people whose families take in less than two times of that in a year.”

Some said they know students who have to transfer simply because they can no longer afford the University. Sophomore Miranda Dotson said her friends never know if they can afford the next semester because the tuition never stays the same.

Dotson also said students should have the right to a frozen tuition, a tuition that does not increase its rates annually, in order to see if they can afford the University before committing to it.

“If they’re not going to drop it, they have to freeze it for now and let people plan for their futures accurately without having to figure out and guess what AU’s tuition is going to be for the next four years,” freshman Quinn Steffy said.

Students also expressed their discontent with AU’s financial aid office. Lenneville along with other protesters said they do not have good communication with the office.

“There are some people who go here who don’t even know where the financial aid office is,” freshman Helen Mercedes said. “It’s located in such a random corner of campus and people are constantly asking where its located - people don’t know where to find access to these resources.”

AU is currently undergoing construction and investing in new projects, such as the new Hall of Science. Some students believed that these projects are not worth it if it means a hike in tuition.

Freshmen Samantha Short and Arielle Frank diverted from the protesters in saying that the Hall of Sciences is a worthwhile investment, even if it does mean an increase in tuition.

“We’re not a well rounded university,” Frank said. “We are very niche when it comes to public affairs and politics, but investing in the Hall of Sciences is an excellent use of the funds. It will also increase the use of our degree.”

When the protest shifted to East Campus, members of the Board of Trustees met with protesters outside and listened to their opinions and views.

Jack Cassell and other Board of Trustees members hear questions from student protestors on East Campus. 📹Video by Maria Carrasco

After he was asked how much tuition will go up in the future, board chairman Jack Cassell said it is expected to be one of the lowest tuition increases the University has ever seen.

Fanta Aw, AU’s vice president of campus life and inclusive excellence, said she wished she heard student input beforehand when the Office of Campus Life and other campus organizations held forums about the budget last semester and two weeks ago.

“Can we do more? Absolutely,” Aw said during the protest. “But to say that there was a complete absence of [listening] is something that I have to take issue with because I spent a lot of my time trying to make sure that we could get as much as student input, and I will invite each and every one of you to come to me and figure out how we can get more student input because that is part of my job.”

Protesters, while content with the presence of the board, wanted President Sylvia Burwell to come out and answer their questions. Some students said part of increasing transparency is disclosing how much Burwell makes annually as well as other members of the administration.

“What will it take to know what she makes?” Lenneville chanted to the crowd.

Some said they don’t expect the University to make any drastic changes to the tuition or lower it at all, but they said the most important part is starting the conversation.

Junior Rolando Cantu, who said he has had difficulties paying for tuition, is glad to see protests happening because it makes a difference in how the University responds to student concerns.

“Having more activists like this raises the issue,” Cantu said. “I’m sure there’s a lot of people that have issues with financial aid, I’m not the only one, but doing small things like this - protesting and raising awareness - really help.”

Correction: This story has been corrected to reflect that the Office of Campus Life and other campus organizations held forums about the budget prior to the board meeting. A previous version of this article stated they had put out a feedback form.

The Eagles battle to a draw with Boston University

District of Cinema Episode 6: The Coen Brothers and Catching Up