Kali Uchis brings the Isolation tour to the DMV

Since 2012, Kali Uchis has risen from an unknown artist on SoundCloud to the face of the indie-pop movement. The 24-year-old Colombian-American star emerged on the scene with her mixtape "Drunken Babble" in 2012. She has also released two full-length albums: "Por Vida" in 2015 and "Isolation" in 2018. Uchis will be performing music off of “Isolation” at the 9:30 Club on Oct. 10th.

Uchis was born as Karly-Marina Loaiza in Alexandria, Virginia to Colombian immigrants. Uchis grew up listening to Jeanette and Astrud Gilberto in her house, but would dig through almost every genre at the record store. From a young age, Uchis became fascinated with music, taking up singing, the saxophone and the piano. Surprisingly, her amazing voice didn’t arise from years of voice training, but raw talent.

Uchis’ soft but soulful voice and lyrics differentiate her from standard pop artists. In addition, you can hear elements of reggae, funk and R&B in each of her songs. There isn’t anyone in the industry like Kali Uchis. She’s goofy and young, but she also has an incredible story to tell. She’s Latina and occasionally incorporates spanish into her songs. She has an interesting style and doesn’t look like most female pop stars, which creates a powerful message of not conforming to traditional European beauty standards.

Straying from popularity has proved to be a great decision and has interested some of the most prominent artists in the industry. Uchis has collaborated with Tyler, The Creator, the posterboy for indie-rap culture, on "See You Again" and "After The Storm," with a special appearance by the legendary Bootsy Collins. In addition, she has songs with Steve Lacy, such as "Only Girl" and "Just A Stranger." In addition, Jorja Smith, Tame Impala, Reykon and Thundercat are featured on “Isolation”.

Uchis artisanship is apparent in her music as well as music videos. In every song, she’s open about her sadness. Despite this, she is undeniably positive and believes in the power of believing in yourself and that things will get better eventually. In her music videos, there is a constant mission to make everything as aesthetically pleasing and psychedelic as possible. In "Tyrant", the video allows the viewer to enter an alternate reality, which appears to mimic a computer simulation. With each scene, her clothes change, each trying to enhance our psychedelic experience.

Despite releasing music previously, Uchis regards “Isolation” as her first proper album. In an interview with Pitchfork, Uchis revealed that she made a lot of music while working on it, but “90 percent of it was trash.” She said she enjoyed working with people she respected and was able to produce a masterpiece. She has a passion for music that shows in her desire to create something she can be proud of, not just what’s popular.

The DMV’s favorite sad girl will be performing at the 9:30 Club on Wednesday, Oct. 10. Doors open at 7 p.m. Tickets can be purchased here. 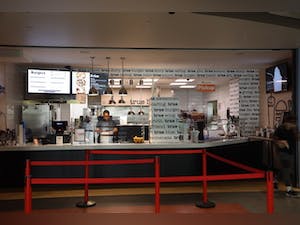 Curious about AU Kitchen? We are too

LOOKBOOK: Fun fall outfits to expand any wardrobe and prepare for the cool months ahead