Civil War, Kermit the Frog are just some elements of mural

The Tenleytown mural opened in October.

If you take a walk down Wisconsin Avenue, you might notice something new and exciting: a mural depicting the history of Tenleytown on the side of the oldest building in the neighborhood, Han Cleaners. As the second oldest neighborhood in D.C. and the home to American University, Tenleytown has a storied past which artist Jarrett Ferrier and local couple Stephen Voss and Charlene Kannankeril decided bring to life with art.

This mural contains pictures of a wide variety of Tenleytown’s historical and cultural events, including the Civil War, Metro system, local public schools and even Kermit the Frog. He has a sentimental connection to this mural, Voss said.

“My wife and I walk our kids to school this way every day,” Voss said. “We’ve seen this wall for a lng time, it’s been in a not-great shape and we always thought that this would be a great place for a mural.”

While looking into this, he and Kannankeril discovered that the D.C. government awards grants for mural projects like this and decided to get to work. The couple sought the community’s input on the project and distributed in-person and online surveys to ask what mural should include. They received about 175 responses from locals sharing their ideas, Voss said. The overwhelming consensus was that they’d like to see the history of Tenleytown.

Voss and Kannankeril began looking for an artist to pull together all these ideas into a cohesive piece. Then, they encountered Ferrier, an accomplished muralist from Glover Park, just a few neighborhoods over from Tenleytown. It was only natural that Ferrier, who has been creating murals for 20 years in the D.C. area, would be the artist for this project, Voss said.

Although he said he initially didn’t think it would be interesting, Ferrier was drawn to the project after doing research and realizing that it had a lot to offer. Ferrier said his love for murals stems from an 11-month bicycle trip with his wife (then girlfriend). On the trip, they encountered several small towns with historical murals. Ferrier said he was inspired by the wide variety of topics explored in those works of art.“He’s a history buff and talented -- he’s the perfect fit for someone really interested in Tenleytown and what’s happened here,” Voss said.

“I thought ‘wow, that’s really cool,’ and I thought maybe that’s something I could do to actually make art,” Ferrier said. “It’s public art -- you’re out here and you’re definitely on display, whether people come by and say they love it, or they like it, or they actually want to talk about some aspect of it.”

These public murals are like building a puzzle, Ferrier said.

“It’s basically a visual problem and you have to solve it,” he said. “You open up this box, there are so many pieces and you don’t know what to do with the pieces, but you have to slowly start. You find a corner and you make that work, you find another area and that one works, and then it slowly starts to come together in the design process.” 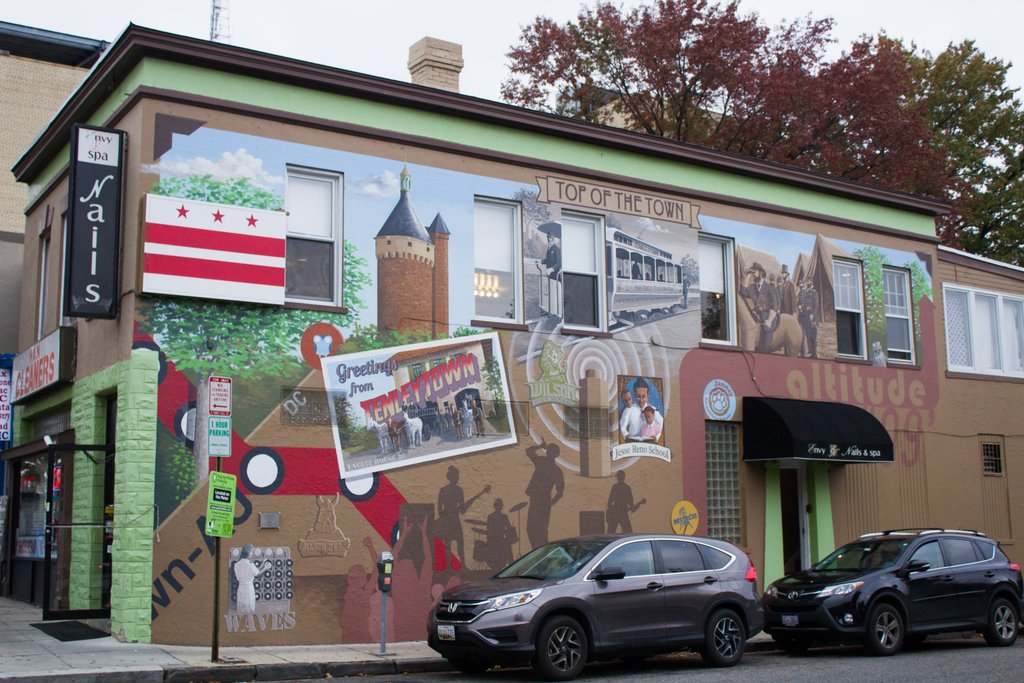 One part of the visual problem was brought up by Tenleytown residents. After the first sketch revision, community feedback largely focused on how the public schools in the area should be included, so schools like the Jesse Reno School were added to the sketch.

Throughout the collaboration process, Ferrier said he hit the books and learned more than even Voss and Kannankeril know about Tenleytown. By the end of 2016, they found out that they were awarded a grant by the D.C. Arts and Humanities Commission, and got to work.

The mural’s grand opening was on Oct. 14, and according to Voss, it brought the community together for a day of celebration, including live music, dance performances from local cultural groups and giveaways from businesses in the area, Voss said. Mayor Muriel Bowser, Councilmember Mary Cheh and National Park Service Superintendent Julia Washburn were all in attendance. It was the culmination of about two years of hard work for all.

Carolyn Long, a member of the Tenleytown Historical Society and a Main Street Board Member, has lived in Tenleytown since 1989 and was one of those surveyed. She said she distinctly remembers seeing Ferrier hard at work painting the mural. She took pictures of the mural’s progress every day.

“I’d walk over there with my camera and he’d be up on his scaffolding, and we would talk,” Long said. “‘How did you do the planning?’ ‘How did you translate it from a little sketch to a great big wall sized mural?’ I’m an artist too, I wouldn’t have any idea how to do that.”

Long also noted that during the process, something about the Jesse Reno School wasn’t quite correct. She believes Ferrier had it as Reno Elementary School and asked him to change it to Jesse Reno School. But Long said she was pleased with the results of the mural.

“It’s got a little bit of everything, telling the history of Tenleytown, and I love it,” she said. “I think it’s beautifully designed, the artist did a great job.”

“When you first start the school year as a freshman and have 20 things to do, a lot of times, disabilities can fall to the side,” Salsbury said.

Artistically, Ferrier said the Civil War portion turned out well, which focused on the battle of Fort Reno, one of the 64 forts built around D.C. during the Civil War to protect the capital. This aspect of the mural is sepia tone, meaning it is painted like a hand-drawn photograph to signify that it happened right when photography was invented. According to Ferrier, it also contrasts with the other colors throughout the mural, from the more vibrant colors in the Red Line to the black and white of the trolley.

“People really seem to love detail -- the more detail the better,” Ferrier said. “I like the combination of things going on: the different subject matter and different ways to approach it.”

This combination of things going on moves beyond the wall and onto the Internet, with social media and the web playing an integral part of the mural experience. Voss and Kannankeril created a website to flesh out these ideas. It contains a big picture of the mural; when you click on a certain aspect of it, information about that aspect will pop up. This creates a user-friendly way of providing information about the mural.

Although Voss doesn’t necessarily expect a lot of people to walk by and spend time looking at the mural, he hopes it will give residents a new way of looking at their town.

“I just hope it gives people a moment of reflection, something that’s visually pleasing in the neighborhood, that will enrich their day in some way,” he said.

This article was originally published in the December 2017 print edition of The Eagle.

Comfort Foods: Bake and saltfish is a Guyanese dish that reminds Josh Evans of home and his grandma