American University's Public Safety department released their annual security report in late September, encompassing all criminal activity at the University in 2016. Each year, the report gives rare insight into crime trends on campus as well as how AU handles those incidents.

For those who don’t have time to flip through all 254 pages, here are some key takeaways from the report, ranging from alcohol violations to the frequency of hate crimes on campus.

The report recorded six hate crimes, all of which took place on AU’s main campus. Public Safety defines a hate crime as “a criminal offense that manifests evidence that the victim was intentionally selected because of the perpetrator’s bias against the victim.”

The number of hate crimes doubled from 2015, when three were reported. In 2014, Public Safety also reported six hate crimes, all of which were vandalism or intimidation offenses.

Compared to D.C. area universities, AU has a slightly higher number of hate crimes. Georgetown reported four hate crimes in 2016, and George Washington reported five, all of which were intimidation or vandalism offenses.

In September 2016, a black female freshman living in Anderson Hall reported that white male students had thrown a banana at her. Another black student reported that a rotten banana was placed outside of her room and found obscenities written on her whiteboard. The report does not cover hate crimes such as the hanging of bananas in nooses in May and or the posting of Confederate flag posters in September because those happened in 2017. 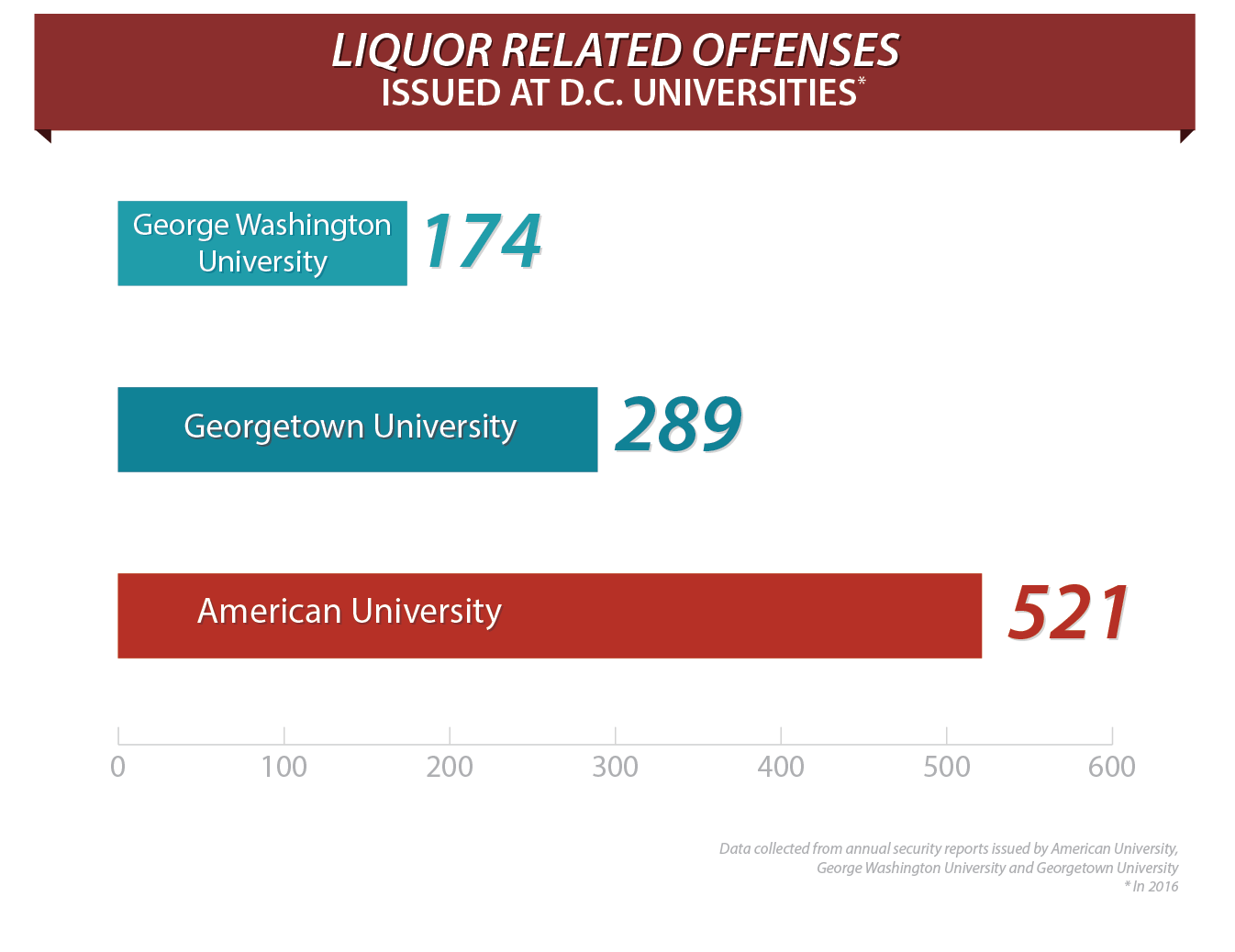 Liquor-related offenses showed the highest number of reports across any other category, and the number has been increasing: in 2016, 521 judicial referrals were made for liquor violations, all of which were made in on-campus residential halls. That’s an increase over 2014, when 389 liquor law violations were recorded, and 2015, when 497 were recorded.

For reported criminal offenses that were committed on or near main campus, the categories that saw a rise in the number of occurrences, compared to 2015, were aggravated assault, burglary, dating violence, stalking and hate crime offenses.

Burglary reports on campus increased from 9 in 2015 to 13 in 2016, while incidences taking place in campus residential facilities grew from four in 2015 to seven in 2016.

Reports of sex offenses committed on campus has been consistent year over year, according to the security report. In 2016, 15 offenses of rape were reported to Public Safety, as well as four reports of forcible fondling.

But, AU has seen a decrease in some areas of campus crime. The number of arson offenses has decreased from 2014, when four reports were made to Public Safety. Only one was reported in 2015 and 2016.

Criminal offense categories that either did not see an increase, decreased or remained constant include robbery, motor vehicle theft, arson and domestic violence. Domestic violence offenses have decreased from six on campus and six in residence halls in 2014, dropping to four cases on campus in both 2015 and 2016 and four cases in 2015 and one case in 2016 in campus residence halls.