University has ‘no plans’ to release full survey results

Only 55 percent of American University students believe that fellow students are committed to creating a sense of belonging, according to data released from AU's internal campus climate survey. Other results of the survey, which were shown during an Oct. 19 community meeting but have not been made publicly available, paint a grim picture of how students feel about their sense of emotional safety at the University.

The survey data, presented by representatives of the Office for Institutional Research and Assessment and the Office of Campus Life, demonstrated a lack of community and belonging among AU students, especially for students of color.

In addition, 49 percent of black and African-American identifying students said they felt emotionally safe on campus. Physical safety was less of a concern to students overall, according to the data shown by administrators.

Despite calls from students at the presentation of the results for the data to be released to the AU community, Camille Lepre, the University’s assistant vice president of communications, told The Eagle via email that the University has “no plans to publish all of the Campus Climate Data.” Instead, she said, the Office of Institutional Research and Assessment will publish a report about the student experience and inclusion using data from the survey and other AU data sources.

Lepre did not answer a question from The Eagle about the University’s rationale for not releasing the full results of the survey.

The Student Climate Survey is conducted every two years by the University to gain information about a wide array of campus issues including academics, safety, personal care and social environment, according to Karen Froslid Jones, assistant provost from the Office of Institutional Research and Assessment. 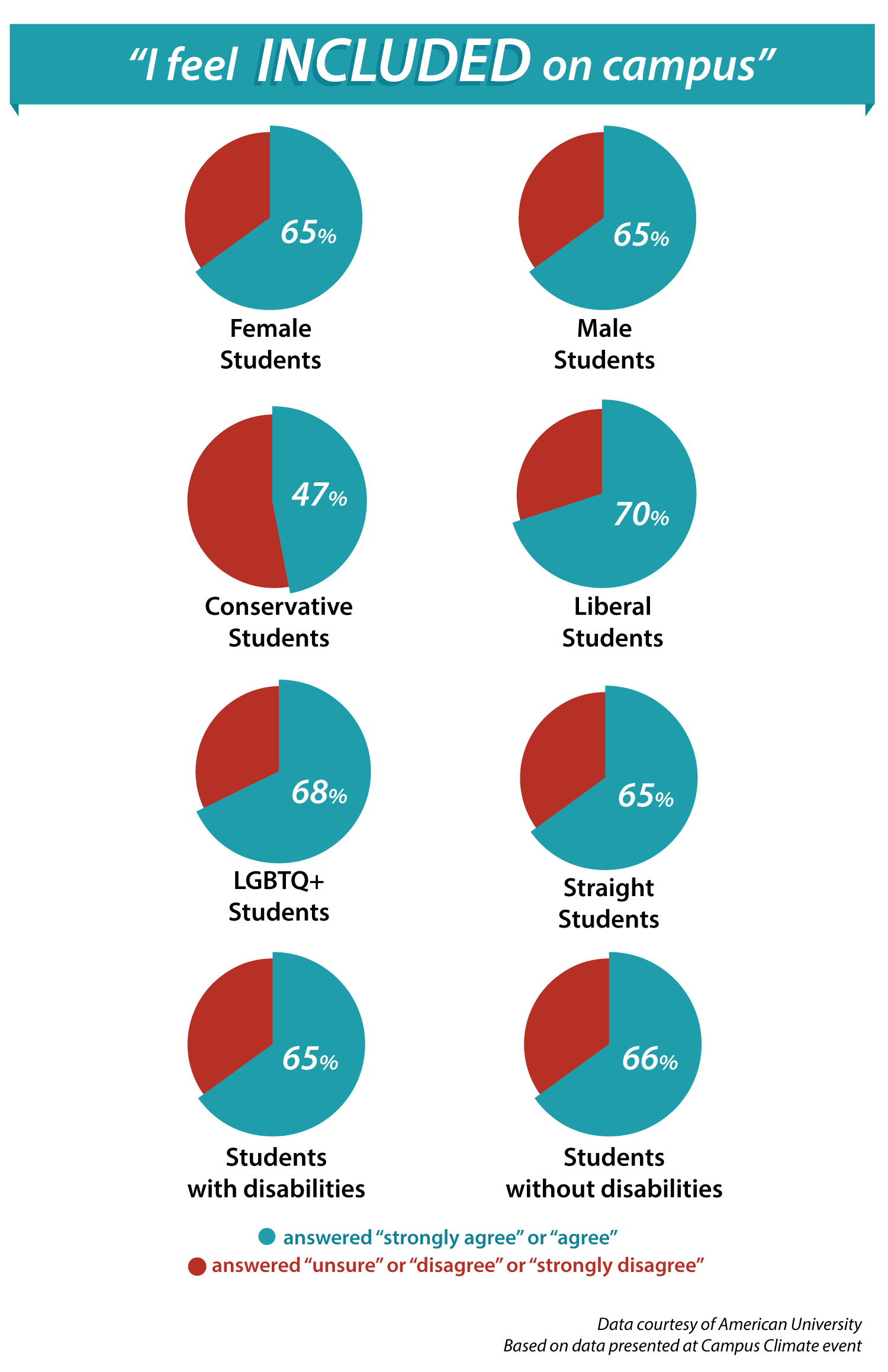 Student Government President Taylor Dumpson advocated for the data's release at a town hall last month. This was the first time that the results of the campus climate survey were discussed publicly as an AU community, Dumpson said.

“I am continuing to advocate for the University to release the campus climate data. I think it’s an extreme disservice to students to not be able to know what the state of the campus community is prior to coming to campus,” Dumpson said.

Issues of diversity and inclusion have been brought to the forefront at AU with the discoveries of Confederate flags on campus in September and bananas hung from string tied like nooses in May. The racist act, which targeted the African-American female sorority Alpha Kappa Alpha Inc., was later termed a hate crime by the FBI. Protests erupted on campus during finals week last year.

The 2017 survey was completed the day before the racist acts against AKA occurred on May 1, leaving survey questions of safety and emotional well-being out of the context of that event, according to Dumpson.

At the time of the survey, only 36 percent of African-American and 55 percent of Hispanic and white students felt that the University itself is committed to combatting discrimination and bias.

“I think the most effective way for [the University] to use this data is to… come up with actionable items and what these follow up steps are,” Dumpson said. “Some people will say, ‘These are the problems, this is what we see, this is coming directly from AU. Now what?’”

Froslid Jones, the assistant provost, presented the selected data, which highlighted concerning divides in campus issues based on race/ethnicity, low sense of security on campus and lack of diversity in the classroom space. Fanta Aw, AU’s vice president of campus life, was also on hand to answer questions during and after the presentation.

Sade Tuckett, a graduate student in the School of International Service who attended the presentation, was not surprised by the results, but believes that tangible action steps are necessary. Tuckett believes that it is the responsibility of the University, not students, to ensure that everyone feels comfortable on campus.

“I hope they define diversity and inclusivity for themselves rather than having students to have that burden,” Tuckett said. “I hope that they develop their own sense of what diversity is, have more consultations on campus and seriously take into account that a professor’s comfort on this campus means way less than a student’s education, and that needs to be shown in the curriculum.”

The University has hired Makeba Clay to work on campus as a consultant for diversity and inclusion. She said she has interviewed 175 community members, including students, faculty, alumni and board members, so far this semester in efforts to bring qualitative research into the data set. Clay will write the report about the climate survey data that will be released to students.

“There is a need to do some deeper work around training, learning and development,” Clay said. “That’s been a theme in everything I’ve seen. There’s a need for faculty, students and staff to increase knowledge awareness in the personal sense.”

Clay’s presentation indicated there have been “additional spaces for multicultural organizations and students to meet and gather,” but it is unclear what campus spaces she was referencing. Dumpson said she is launching a safe space located on the third floor of Mary Graydon Center for students of all backgrounds, set to open by the end of the semester.

Froslid Jones emphasized the need for stronger modes of communication from the University to students.

“One thing we learned in our work with RiSE [Reinventing the Student Experience] was that AU does not do a very good job communicating with you,” Froslid Jones said, referencing the University’s initiative to reshape student services.

“We are used to communicating in email, but you’re not as used to doing that in email. We are trying to gauge how well we are communicating with you.”

A last word: farewell from The Eagle's class of 2022