“I did pretty good,” A$AP Ferg told The Eagle after the concert in an empty Bender Arena locker room.

Ferg headlined the concert with a one-hour compilation of some of his recent hits from his latest studio mixtape, “Still Striving,” as well as the older songs that put the artist on the map seven years ago.

“Tonight was a little bit nerve wracking because I did a lot of new songs,” Ferg said. “His was my first time performing my mixtape that I just put out so I was trying to like make sure I knew all the lyrics.”

All eyes and cell phones were on A$AP Ferg during the performance of “Work” and “Shabba,” as he watched in awe as the crowd recited all of the words to one of his hottest releases. You could feel the ground shaking as the entire crowd formed a huge mosh pit, filling the arena. The energy coming from the crowd led A$AP Ferg to jump off the stage and make his way into the huge mosh pit while reciting the words to “ Let it Go” from his 2013 album, “Trap Lord.” After about five minutes of being consumed into the crowd, A$AP Ferg was pulled out by his security and put back onto the main stage. It wasn’t long before he realized that someone in the crowd had taken his hat.

AU was a zoo!!! In the crowd with the people!!! And ears iknow you took my hat pic.twitter.com/d7hztnBg21

The DMV-based hip hop collective, Respect the Bando, pumped up the crowd as the opener for the night. Respect the Bando featured some of their original songs during their 45-minute set, including “ Check Up” by Johnny B and “Camry” by Tair Nash and La Huite. Their set was groundbreaking and got the entire crowd jumping. The atmosphere in the arena immediately shifted from your standard Welcome Week hip-hop concert to a high-paced, trap house party. 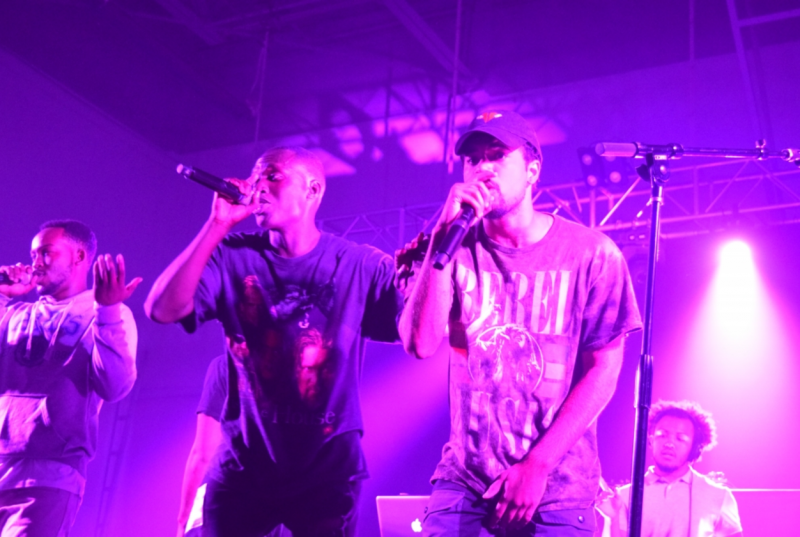 Following Respect the Bando’s performance, Rico Nasty came onstage for a short, but noteworthy performance. Rico Nasty came out and left it all on the stage with the rendition of her two latest singles, “ Poppin” and “Watch Me.” While her performance left most people in awe, audience members were disappointed that the artist left out one of her earliest and most popular releases, “iCarly,” from the set.

Finally, the time for A$AP Ferg came, and as soon as he arrived onstage, the beat for “ Plain Jane,” one of the singles from his latest mixtape “Still Striving,” started playing. “Still Striving” is the second mixtape from the Harlem born hip-hop artist, but prior to its creation, Ferg said he worked very hard to determine the “mission statement” that he wanted to convey with his new project.

“With [my second studio album] Always Strive and Prosper, I was making a point of me being a human being, like a lot of people forget that past all of the celebrity, I am a human being. I have always strived and finally prospered...basically my trials and tribulations of being Darold Ferguson and becoming A$AP Ferg…even though [I] finally prospered, [I] still gotta strive,” Ferg said while discussing the statement he wanted to make with “Still Striving.”

After the electric performance of “Plain Jane” and “ Trap and a Dream”, he greeted the audience by saying “I am so pleased to be here tonight.” Ferg then commented on “Not only [the] love [in the crowd], [but] all [the] different colors,” referring to the students within the crowd.

In a 2015 interview with Ali Shaheed Muhammad and Frannie Kelley, Ferg stated that racism was “over.”  However, he was relentless during his performance of his new song, “ Nandos,” which touches on police brutality and the criminalization of black bodies with lyrics such as “The pigs f*ckin' with me I'mma turn into Django/Let's ride on these ni**as 'til Kirk Knight gotta speed up the tempo,” and “F*ck what you thinkin' my ni**a? This USA sh*t get it critical/I'm not talkin' lyrical/I'm talkin' po-po-po that be shootin' ni**as in the blues/Sh*t is so cynical.”

“Anyone can make themselves cool...if they post Black Lives Matter...but it only matters if your going out there and you're actually putting in the work for it,” he continued in the interview with Ali Shaheed and Kelley.

By the end of the concert, students begged Ferg to stay and perform one more song. Ferg then decided to perform “Plain Jane” one more time before leaving the stage.

Not only did Ferg enjoy playing the hit for students, but he said he would also perform it for aliens if given the chance.

With the Welcome Week concert coming to an end, the only thing left to question was: who took A$AP Ferg’s hat?

Trailblazers: Meet the Black members of the AU community who made history