June shaped up to be the month of girl power

June is the month of new releases, and it’s shaping up to be all about girl power.

From veteran singers Katy Perry and Halsey to newcomer Lorde, these women are out to teach fans about women power in the world while each maintaining their unique vibes. Lorde released her second album, “Melodrama,” and Katy Perry came back swinging with “Witness,” her fourth album, all after Halsey released “Hopeless Fountain Kingdom.”

These albums each make an impression in their own unique way, teaching listeners what the artists have learned about life and their role in the world.

Four years after “Pure Heroine” had everyone singing they “would never be royal,” Lorde is back singing another tune with newfound sophistication. Her first release in 2013, “Royals,” captured the experiences of a teenager just beginning to grapple with not being “cool” and having her first experiences with love.

Lorde explores who she will be as a woman in today’s world in her sophomore album, released on June 16. With “Pure Heroine”, she seems to be coming into her own in her life and music, proving that she is here to stay and isn’t a one-hit wonderwith the success of “Royals.”

“Green Light” has been a personal favorite of Lorde’s celebrity friends, Taylor Swift and Ed Sheeran, since its release. It starts with piano, a new instrument from what we usually hear from Lorde, as she details her breakup. The song then explodes into a club beat, her lyrics telling the story of her post-breakup heartbreak. Themes of heartbreak are laced through the album. However, with Lorde’s unique, dry humor behind the lyrics, it’s not what we’ve become accustomed to in the industry like Taylor Swift ballades. Lorde’s fresh take on heartbreak is intriguing and a good break in style from the same theme.

Katy Perry’s embarks on a new era with “Witness”

Just a week before Lorde’s album, Perry’s “Witness” made waves on June 9.

Perry seemed ready to promote her album in any way possible, hinting on Twitter all the way back in February that she wanted to call this new era in her career “Purposeful Pop.”This hint at a politically-minded album ignited a media firestorm, drawing the attention of many who do not support Donald Trump’s presidency.

As an early part of this era in her music, Perry attended the Women’s March to show her commitment to acause she wanted to support with her album. Using her position to influence politics could change the way we view pop culture as celebrities choose to advocate for issues they care about. The tweet hinted at a very politically aware and clever commentary in the album; but, in reality, the commentary felt more like a brief mention rather than a clever take on politics. Which is what we’ve heard hundreds of times on SNL and other late night shows. “Chained to the Rhythm” was a call to action, but this theme didn’t carry through the other tracks.

Each of her albums leads to a new era in her style, both in her music and her fashion choices. This era was punctuated with a pixie cut and a stronger set of political beliefs. Going forward, with the “Bad Blood” dead and gone, Katy Perry is influencing the political conversation and entering a feminist era.

Halsey finds inspiration in the classics for “Hopeless Fountain Kingdom”

Halsey released her incredibly well-received album “Hopeless Fountain Kingdom” on June 2. Rolling Stone named it one of the 50 best albums of 2017 so far. Written as a series of collaborations with other artists like The Weekend and Sia, her second album is one based in the forbidden love of Romeo and Juliet. She starts the album with a reading of the opening of the Shakespearean play to set the tone for the tracks to follow. Her obsession with the classic tale of love goes way back. Halsey even had "These violent delights have violent ends" from “Romeo and Juliet” inked on her arm in 2014.

Continuing with the electropop theme of the June releases so far, she has produced a set perfect for dancing to on a long, summer road trip. The theme of impossible love is based on a bad breakup, which can overdone by female artists, but Halsey brings a new perspective to the same old story by adding Greek mythology and Shakespeare to the drama. The depth introduced with these references in addition to her usually candid way of addressing hardship has drawn in fans who are tired of the stale relationship trope. Halsey constantly manages to stay above the fray in conflict between artists, like the Swift-Perry “Bad Blood.”

There’s more to come for your summer playlist

As we enter into a new season of album releases, each artist is coming into her own with new aspirations and outlooks on life behind their signature vibes. Lorde is cementing herself as a part of our playlist in a world full of strong female figures like Perry and Swift. HAIM and Lana Del Rey are both set to release their second and seventh albums, respectively, in July. 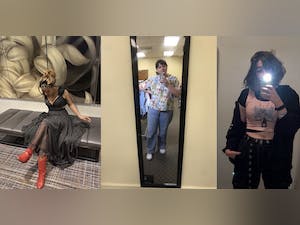 Getting dressed for class: Are clothes more than material?