In a match featuring the top two teams in the Patriot League, the AU volleyball team held off the Lehigh Mountain Hawks in a error-prone match Friday night in Bender Arena.

The Eagles controlled the first set, but only won the final two sets by a combined four points. Neither team achieved high attacking percentages, with neither able to hit above .260.

Despite recording 17 errors, Lehigh (8-11, 4-2 PL) was able to keep the match tight by capitalizing on Eagle attacking and service errors in the latter two sets. The Eagles, however, overcame their errors and defeated Lehigh 25-17, 25-23, 26-24.

“[It] was a little scrappy, but Lehigh is a scrappy team and they’re tricky,” head coach Barry Goldberg said. “It’s a good win for us and we’re happy to be sitting where we are [in the league].”

Sophomore outside hitter Aleksandra Kazala, the reigning Patriot League Player of the Week, led the Eagles (16-6, 6-0 PL) statistically with 11 kills, but committed seven errors with an attacking percentage of .133. Freshman middle blocker Vela McBride contributed seven kills and three service aces during a 5-0 run by AU in the third set to overturn a three point deficit.

“Each day we’re playing, one or two players are showing up and getting big numbers for us and that’s getting us through [matches],” Goldberg said. “We’re happy with getting through these [matches], but one-by-one we’re going to need more contributions as the teams get better and the season goes on.”

AU jumped out to an early lead and took the first set 5-1 after the Mountain Hawks committed attacking errors on four of their first five offensive attempts. Lehigh hit -.062 in the first set and committed eight errors. AU freshman outside hitter Shannon Webb recorded four kills.

Lehigh started the second set strongly and held an early four point lead behind a pair of service aces and kills from freshman outside hitter Julia Pressly. Kazala pulled the Eagles back level in the set with three kills and an unreturned serve. Neither team managed to build a lead larger than three points in the set, and AU benefitted from a late Lehigh service error to claim the set.

The third set was back-and-forth, with the Eagles getting strong contributions from McBride and junior middle blocker Loren McKenzie, who recorded three kills in the set. While both teams recorded attacking percentages above .300 in the final set, Goldberg said overall both teams’ defenses benefitted from poor attacking by their opposition.

“The attack errors were two-sided. They started out and they hit a bunch of balls out of bounds and didn’t really hit a great percentage,”Goldberg said. “I think both of our teams hit a bit lower percentage than they’ve averaged up to this point [in the season].” 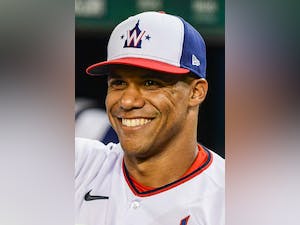 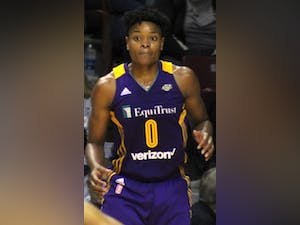