Josselyn Ebanks, who was removed from campus by Public Safety on Jan. 28, is now allowed back on campus

An Aramark worker’s ban from campus was lifted Feb. 11 after she was fired and removed from campus by AU Public Safety on Jan. 28.

Josselyn Ebanks, known to many students as the woman behind the Tavern’s Bene register, came to campus early that Thursday to work a double shift, she said. Instead of working at Bene, she was asked to start at Global Fresh, where she was to work the register. Around 3:30 p.m., her managers asked her to leave her station to help stock the P.O.D. Mini Mart in the Mary Graydon Center.

The scene caught the attention of her supervisors, and Ebanks was asked to logout of the register, follow her bosses and talk to her supervisor Maria Kimball, she said.

Supervisors came back with Public Safety officers who told her that she was barred from campus, according to Ebanks.

“They didn’t explain that much,” Ebanks said. “They just said that they needed to go do an investigation and barred me from campus.”

Aramark and the University did not reply to Eagle requests for comment.

School of Public Affairs senior Carlos Vera, who serves as head of the Student Worker Alliance and is the founder of the workers’ rights campaign, Exploited Wonk, said that in Ebanks’ situation, the contract between the Aramark workers’ union Local 23 and the University was not followed.

“The main issue here is not whether she tapped her arm or pulled it or whatever. Obviously we stand behind her, but that’s not the issue here,” Vera said. “The issue here is that there’s a contract. If something’s not in the contract, it can’t happen. Basically there’s a grievances system that management has to adhere to. And that’s something that they agree with the union. There’s nowhere in the contract where it says you can call Public Safety.”

Article 28 in the contract, which is effective through May 31, 2016, spells out the terms and conditions for the discharge and disciplinary action of Aramark employees.

“The Company shall have the right to discharge or lay off any associate for just cause, including but not limited to, failure to comply to reasonable rules and expectations of the Company,” according to the contact.

The article also states the union member must be clearly told of the reasons for any discharge or layoff. The exceptions to this rule include any discharge that occurs as a result of intoxication, fighting or drug use.

If an investigation reveals that an employee experienced discharge for an unjust reason, he or she may be “reinstated to his/her positions without loss of seniority and shall be compensated for the time lost, if so instructed by the Arbitrator.”

Article 28 does not include a section on the procedure for removing or barring an employee from campus, and Vera said that the use of Public Safety to remove an employee is “humiliating.”

Vera believes Ebanks was targeted by Aramark supervisors after she filed grievances against a former supervisor which ultimately lead to her termination. According to Ebanks, the supervisor, Jackie Wilson, threatened her multiple times during the spring 2015 semester and slashed her tires twice while her car was parked in Bender Pavilion during a shift.

“Since she got a supervisor fired that was very close to other supervisors, she’s had a big ‘X’ on her back,” Vera said.

Last semester, supervisors tried to write Ebanks up a warning for going to the water fountain to get some water, Vera and Ebanks said.

It gets hot in the Bene area because of the lights, so she said she needed to get some water.

“They just find ways to nitpick,” Vera said. “Frankly, it’s not just me saying this, but I would say Josselyn is very popular with students. Students love her. There’s two things you know you’ll always get with her, and it’s kindness and a smile.”

Ebanks said she believes her involvement in the workers’ rights movement makes her a “target” among her supervisors, too.

“I tried to speak up for me, and they don’t like it,” she said. “You have to be an obedient worker, I believe.”

After two weeks off of work, Aramark management offered Ebanks her job back and Public Safety lifted her ban from campus, Ebanks announced Feb. 11 in a Facebook video posted from Vera’s account.

“The issue here isn’t what happened that day, per se, but just the bigger issue of who wants to be in a workplace where they’ll just call the police,” Vera said. “It’s very dehumanizing.”

Vera and Ebanks agreed that there needs to be a more well-defined process for terminating employees.

“We are using the police force to criminalize workers,” Vera said. “Even if it was something more serious or whatever, there’s still a process. And I think that’s the key.” 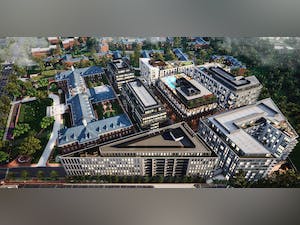 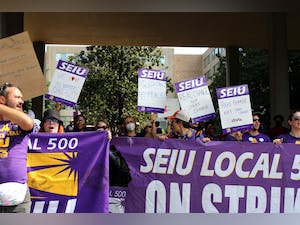 Following weeklong strike, University and Staff Union come to an agreement on contract