Title IX: Changes on campus since the federal investigation began

This story originally appeared in the print Oct. 16, 2015 Special Edition of The Eagle.

Since the start of the Department of Education’s Title IX investigation into AU on March 11, the University has sought to create a safe space for all genders by preventing sexual assaults, as mandated by federal law.

The investigation began because an undisclosed student filed a federal complaint that AU did not handle a sexual assault case fairly, The Eagle previously reported.

“We taught consent, we talked about boundaries, we talked about bystander intervention, and I think it was a really successful program in terms of getting people to have a better understanding of consent and what it looks like specifically,” said Students Against Sexual Violence executive board member and junior Faith Ferber.

In addition to serving on SASV’s executive board, Ferber also worked as an advocator, creator and facilitator for the program..

“[Empower AU] is something that students advocated for, and we got it,” Ferber said. “We thought that would be a much harder battle than it ended up being, in terms of actually getting that program implemented.”

Despite increased education, the school has seen a rise in the number of reported sex offenses. Twenty-one forcible sex offenses were reported in 2014, an increase from the eight reported in 2013, according to the Department of Public Safety’s Annual Security Report released Oct. 1.

Since the Title IX investigation opened in March, there have been eight reported sex offenses, attempted sex offenses or forcible fondling incidents, according to the University’s crime log.

“Though it is counterintuitive, typically a higher number of reports is a good thing,” Yzaguirre said. “It means that people are not only more aware of resources and reporting options, but that they feel comfortable coming forward.”

Ferber agreed an increase in reporting is positive.

“An increase in numbers is fantastic, because it’s a little more representative of the actual rates of assault on campus,” Ferber said.

According to Ferber, a higher number of reports means that survivors recognize what assault is and feel comfortable and safe reporting incidents to the school. Also, high reporting numbers mean the University’s conduct process is becoming a little more supportive of students, she said.

To further combat sexual assault on campus, this semester SASV has a goal of simplifying both the reporting and student conduct process for offenses, Ferber said.

“We want to make the process much clearer to survivors, because a big issue is that if people are debating whether or not they want to report, they’re not going to report if they’re not totally sure what that’s going to look like,” Ferber said.

Currently, the process of reporting conduct violations is broken down in a flow chart on the University’s website that Ferber said is difficult to understand. SASV members plan to create a series of videos explaining the process in a clearer way, she said.

“We hope that would encourage more people to report,” Ferber said.

Additionally, SASV will focus on mental health this semester, especially in regards to the Faculty Senate’s resolution on the use of trigger warnings in the classroom, according to Ferber.

“That’s a huge issue for survivors, so in terms of survivor support, we really want to look at the mental health aspect of it and how we can be more accommodating to students in the classroom,” Ferber said.

Work to be done

There are many issues related to sexual assault to advocate for on campus, Yzaguirre said.

“As for what still needs to be done, whenever you are working on eradicating broad, societal problems, there will always be work to do,” Yzaguirre said. “The key is determining what kinds of programs and initiatives will be both effective and have the broadest impact.”

This year, the Sexual Assault Working Group, comprised of faculty, staff and student representatives who ensure the continuity of AU’s sexual assault prevention, will assess the University’s approach to response and prevention, according to Yzaguirre.

In addition, the University is in the process of hiring a new Sexual Assault Prevention Coordinator to replace Daniel Rappaport, Yzaguirre said.

“We are currently interviewing candidates and looking forward to having the position staffed,” she said.

Ferber added that she hopes the position is filled by the end of October.

Despite efforts to combat sexual assault, Yzaguirre said sexual violence extends beyond the AU campus community and may be difficult to stop completely.

“Sexual violence is a societal problem, and unfortunately, its perpetuation is very much ingrained in our cultural mores,” Yzaguirre said. “In order to eradicate sexual assault completely, we’d have to have changed not only the culture at AU, but ‘rape culture’ in general — quite a tall order. Still, absolutely, my goal is to work towards ending sexual violence, and I think about that goal every day.”

Correction: A previous version of this article incorrectly attributed the timeline for hiring Rappaport’s replacement to the wrong individual. Faith Ferber said she hopes Rappaport’s position would be filled by October. 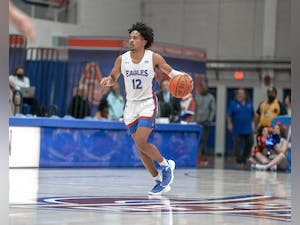