Professors held a protest outside the Katzen Arts Center in front of visiting prospective students and families on Friday, highlighting inequalities for AU’s food service and housekeeping staff.

The participants circulated flyers at the event from 10 a.m. to 2 p.m. They included comparisons between service worker and AU employee benefits, including access to free classes, free tuition for children or tuition exchange programs as well as retirement accounts. Food service and housekeeping workers do not receive these benefits.

The disparity in benefits for service workers and University administrators’ dismissive response to requests for improved worker treatment are key problems, according to Jim McCabe, a retired American University Professor and who has helped organize the petitioning and a blog on the issue.

“[Workers] should be able to retire with dignity. So far the AU administration has not taken that moral stance.We would like AU to provide some supplement to their retirement plans,” McCabe said.

AU hires contractor companies to manage food services and housekeeping, which oversees worker employment, treatment and benefits. This began in the 1980s, and since then, service worker needs have been handled by companies like Marriott, Bon Apetit and currently, Aramark.

Following initial contracts awarded to Marriott, workers were provided tuition benefits to enroll in classes, McCabe said. However, after a few years those benefits were revoked. In addition, over the 25 years Marriott worked with AU, they did not offer worker pension plans.

“Now, [workers from that time] also can’t retire,” McCabe said. “These older workers didn’t get any retirement benefits from 1982 to 2005.”

AU could easily supplement these workers with the funds needed to retire with a safety net, according to McCabe.

Carolyn Gallaher, a professor in the School of International Service, said the poor treatment of workers does not align with the University’s mission statement.

“The University has the power to say we want our workers to receive a better wage or better work benefits. AU has multiple ways to address these issues and so far we have not seen them take action,” Gallaher said. “These workers are in their 70s and they only have $11,000 in the pension plans.”

Chris Simpson, a professor in the School of Communication, attributed worker inequalities in part to racial and ethnic distinctions.

“You can walk through the quad and you can see very distinct color and ethnic distinctions [as to] who has what jobs,” Simpson said. “It is completely obvious. AU needs to treat its employees decently and address the ethnic segregation that is prevalent at this university.” 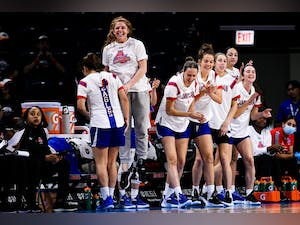