James McCabe, a former AU professor, was arrested by Metropolitan Police around 1 p.m. after distributing  flyers in support of AU food service worker benefits in the Terrace Dining Room.

Public Safety and Metropolitan Police officers took McCabe into custody as he was handing out flyers titled “the human rights bulletin at American University,” according to Danny Anderson, a sophomore in the School of International Service. Anderson said he was at the table next to McCabe when the arrest occurred.

McCabe’s flyers detailed benefits regular AU staff receive that are unavailable to contracted service workers, specifically mentioning that some longtime workers are unable to retire due to poor retirement plans.

“[McCabe] was advocating for the benefits and rights of AU service workers because Aramark doesn’t really give out the benefits other AU workers get,” Anderson said.

Officers came up to McCabe and tried to take the flyers and a poster McCabe was carrying, at which point Anderson said he took the materials so that they would not be confiscated. Anderson said the officers eventually left with the poster, which one officer said was “under investigation.”

The Public Safety officers were monitoring McCabe’s table from nearby as he handed out the papers, according to Olivia Shalhoup, a freshman in SIS who was there as the arrest happened.

“There was a lot of AU Police standing there watching them the whole time. It didn't escalate until later,” Shoehope said. “I don't know why they arrested him. [In TDR,] he was just sitting there and talking. He wasn’t yelling or anything” 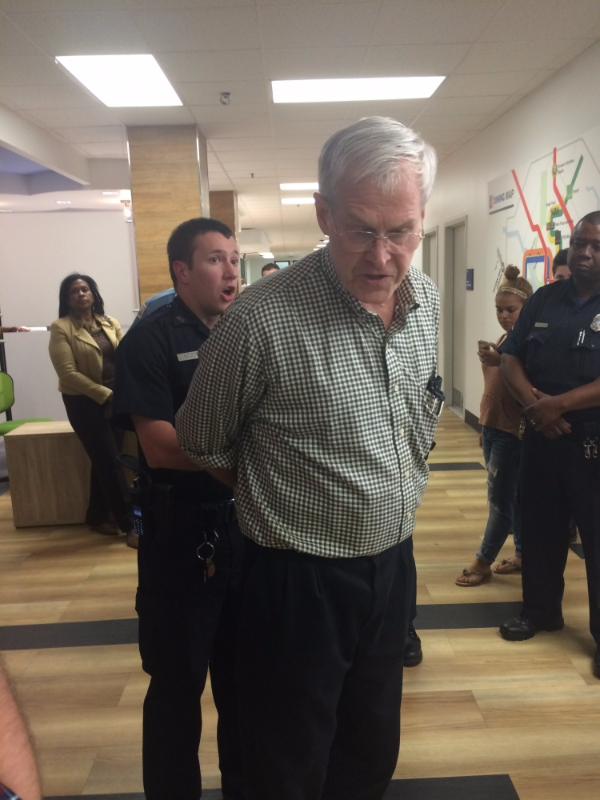 McCabe was escorted out of TDR by the Metropolitan Police and put into a police van, with a Public Safety car directly in front of it. The two cars left campus around 1:20 p.m.

“I asked the police what they were charging him for, and they said they were not charging him, they were just transporting him by request of the AU police,” Shalhoup said. “He was also saying that the handcuffs were too tight. One girl yelled to the police to loosen them.”

“American has these values that — ‘Yes let’s fix the world and make it a better place by speaking our minds’ — but then they silence the people who are talking about it,” said Boraj Herraiz, a freshman who was also sitting with Shalhoup.

McCabe was then led out of the dining hall, through the first floor of the Mary Graydon Center and to the road in front of the building as students watched. Genesis Marte, a sophomore in the School of Public Affairs, was tabling for student media organization HerCampus outside of MGC as McCabe was led out of the building. She said a group of about 30 students took pictures and video as McCabe was escorted.

“He just kept saying ‘This is what happens when you protest the treatment of service workers at AU,’” Marte said.

Public Safety officers outside of MGC declined to comment for this story.

Marte said she had seen McCabe several other times in the past few weeks handing out flyers and protesting food service workers’ benefits in TDR and in front of Freshii. McCabe was also involved in a protest outside of the Katzen Arts Center last Friday, The Eagle previously reported.

Michael Elmore, the senior director of the University Center, said that his team knew about recent protests.

“What I had been hearing was a former faculty member had been showing up periodically to do something like this,” Elmore, who helps oversee events and space usage in MGC, said.

He added that because AU is a private university, people who are not current students, staff and faculty may be removed from campus, whether or not they are alumni or old employees.

“If an-off campus person comes on campus to discuss any kind of advocacy, they need to be hosted by some legit campus organization,” Elmore said. “If you’re not a University employee or a registered student, this is a private campus.”

The Eagle previously spoke to McCabe during the protest he participated in at the front of Katzen last Friday.

“[Workers] should be able to retire with dignity.,” McCabe said at the time. “So far the AU administration has not taken that moral stance.We would like AU to provide some supplement to their retirement plans.”