U Street Music Hall opened its doors on Sept. 17 to a flood of hawaiian shirts, smiles and fans that were ready to sing along to Vacationer — a band specializing in the art of “chill.”

Philadelphia-based Vacationer first gained recognition in the music sphere for its blend of electronic and tropical music, dubbed “Nu-Hula.” Lead singer Kenny Vasoli started the band as a side project in 2011. Since then, Vacationer has performed at Bottlerock Festival and has had both of its albums listed on Billboard's top “Heatseekers Albums,” which tallies top-selling up-and-coming albums each week. The band’s single “Gone,” released in 2012, reached 42nd on the list, and Vacationer’s second album, “Relief,” jumped to tenth on the list.

Great Good Fine OK, an electronic act from Brooklyn, performed an opening set for the concert. With a mermaid-like sparkly coat and glowing drumsticks, the New York-based band was a perfect start to get the crowd dancing.

Vacationer opened its show with its latest single, “Wild Life,” then performed other songs from its most recent album, “Relief.”

The band’s music sounded relaxed, which promoted a stress-free lifestyle during the blissful performance. As Vasoli bopped his head in a tie-dye shirt, smiling, concertgoers bounced right along with him.

Most attendees knew the words to every song the band performed and sang them aloud, illustrating Vacationer’s loyal fan base. When asked by Vasoli if they’d previously been to a Vacationer concert, loud calls of affirmation flooded the venue.

Even Valosi recognized that the crowd was riding the same “chill wave” as the band.

“You’re chillin’ me softly with your soul, D.C,” Vasoli said, “I see a lot of floral patterns and hair similar to mine, so I feel welcomed.” 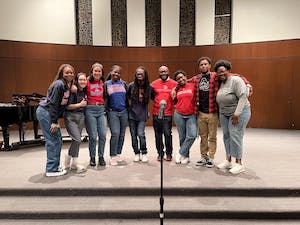 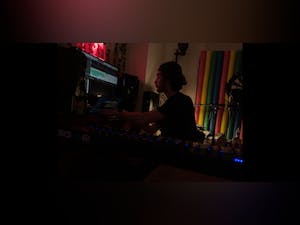