On April 15, approximately 30 AU students and faculty filled the Perch for “Is a Yak an Attack?,” a discussion about self-expression on the anonymous social media app, Yik Yak.

The discussion came just a month after a string of racist comments were posted to the Yik Yak site from AU’s campus, The Eagle previously reported.

“I wanted to create a space where students could have a discussion about Yik Yak,” Mendelson said. “I knew going in that it’s not a singular conversation, but it’s a part of many conversations.”

The event’s focus was to answer the question of whether freedom of speech should be extended to racially-biased posts on Yik Yak, but the conversation quickly turned to why people feel the need to post on anonymous sites in the first place.

Students suggested that Yik Yak contributors are in search for support for their opinions and feelings. By receiving “up votes” or positive replies, they are receiving validation for what they post, Mendelson said. Recently, AU’s Yik Yak feed has shown some students reinforcing each others’ racist and derogatory remarks, Talon said.

Other students said Yik Yak, if used properly, can serve as a form of entertainment or can help individuals find support for personal struggles like eating disorders or depression.

Ivers argued that anonymity online is moving millennials backwards instead of progressing them forward.

“There’s this overall lack of civility in general,” Ceran said. “We don’t have the tools to communicate properly on a general basis. I think part of our role as administrators...is that we have to do better [at] creating a space where we’re actually providing dialogue moments where those statements don’t have to be the character of our community.”

Talan emphasized how media, if used properly, can be a powerful tool to connect with others and enact positive change.

By the end of the night, the event’s main question was still unanswered.

“I think there were a lot of really interesting ideas shared,” Mendelson said. “Did we answer the question ‘is a Yak an attack?’ No, but I think that’s fine, and much more was gained by not answering that question than if we had said either ‘yes’ or ‘no.’” 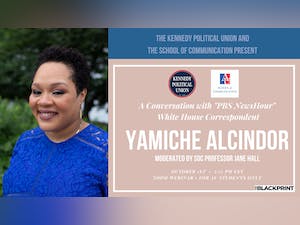