With 4.6 seconds remaining in the 2015 Patriot League Championship, senior guard Jen Dumiak hit a final jump shot that secured her name in the record books and earned her team a bid to the NCAA for the first time in AU history.

The crowd in Bender Arena erupted in cheers, and Dumiak’s face broke into a huge grin. After a season of earning multiple Patriot League awards, including tournament MVP, she finally secured the one honor that she was missing: conference champion.

“Last year when our season ended, we were bummed,” Dumiak said. "I remember this distinctly. Arron [Zimmerman] and I were together, and [Shaquilla] Girlie [Curtis] came over to our apartment and said ‘next year, we’re going to do anything to win this championship, whatever it takes’…and it’s kind of described our team this whole year, do whatever it takes to win, and we were successful."

Senior forward Zimmerman, who totaled six rebounds and 12 points during the game, echoed her teammate’s excitement.

“I don’t even know how to describe it,” Zimmerman said. “It was awesome. I was standing there in the corner when the shot clock was running down, and ‘it was a moment from my dreams. I’ve always dreamed of this, and it was awesome.'”

Strong defense anchored the Eagles success as they soared past the No. 6 seeded Lehigh Mountain Hawks, 65-50. AU held Lehigh scoreless during its first three offensive runs, and Dumiak earned the first two points of the game with a quick jumper. She continued to lead the team on the court, playing all 40 minutes and scoring 24 points and six assists in the process.

“She’s our leader, she’s the smartest player, but she loves the assist as much as she loves to score, and we have people around her in Girlie and Arron and Michelle [Holmes]and Emily Kinneston and the people off the bench that are willing to help her out if she’s not having a day,” second year head coach Megan Gebbia said. “It’s a collective team effort.” 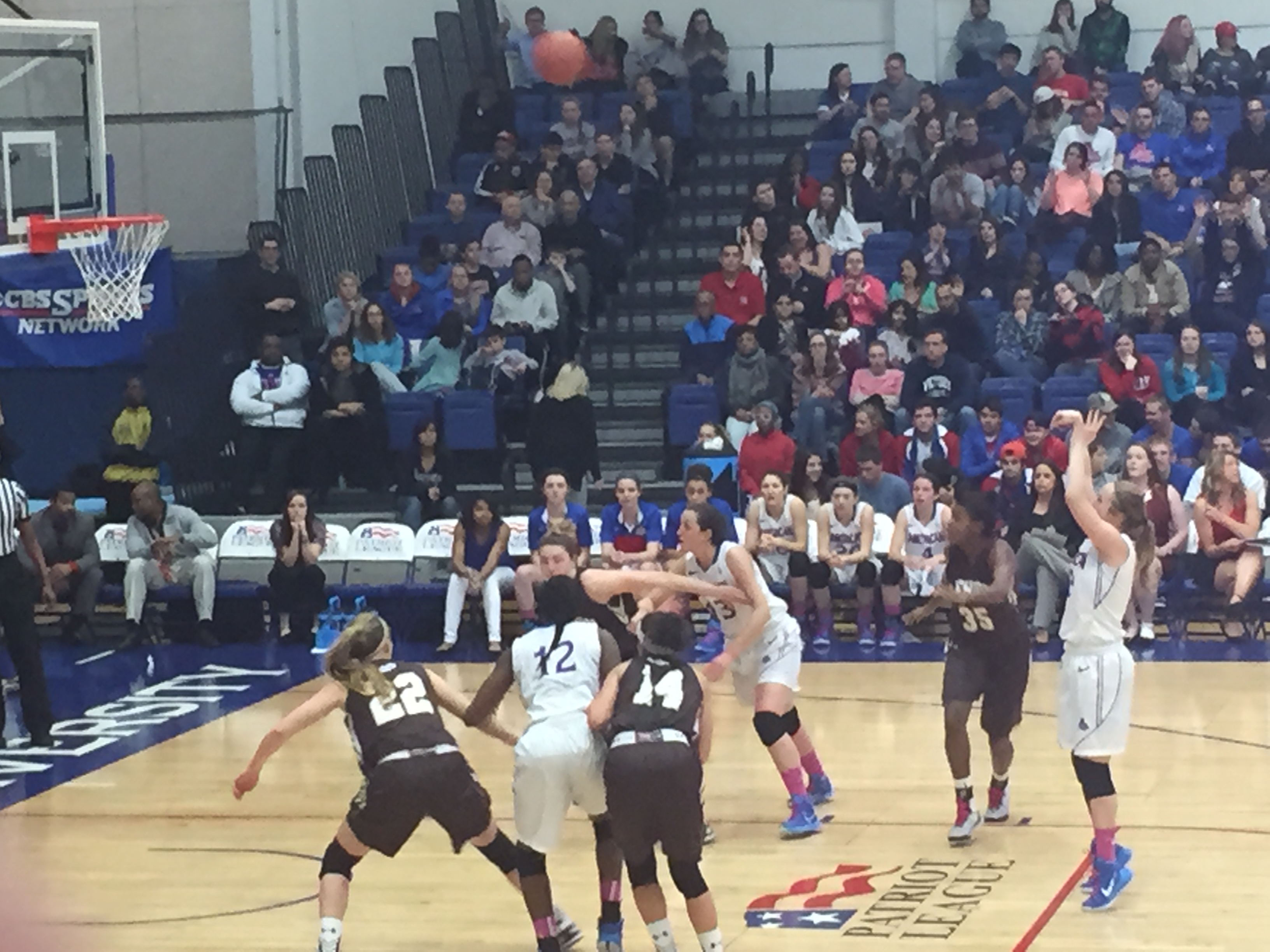 The Eagles rallied behind Dumiak’s lead and played confidently in the early minutes of game. They surged to an 18-7 led, until Lehigh took control 24-22 when sophomore forward Lexi Martins sunk a three point shot with three minutes left in the half. Dumiak hit a field goal as the clocked ticked down, and the two teams entered halftime tied at 24-24.

Gebbia spent the halftime emphasizing the necessity of defense and rebounds to her team, and they responded in the second half, doubling their rebounding total in the second 20 minutes of play.

“We talked about it in the locker room at halftime that we’re a second half team, and we have been all year," Gebbia said. "We just cleaned up the board and got to loose balls.”

Both teams returned to the floor in the second half with added physicality. Lehigh committed 11 personal fouls in the final 20 minutes, sending AU into the “double bonus.” Dumiak hit all four of her free throw attempts, and Zimmerman also recorded four points from the foul line. 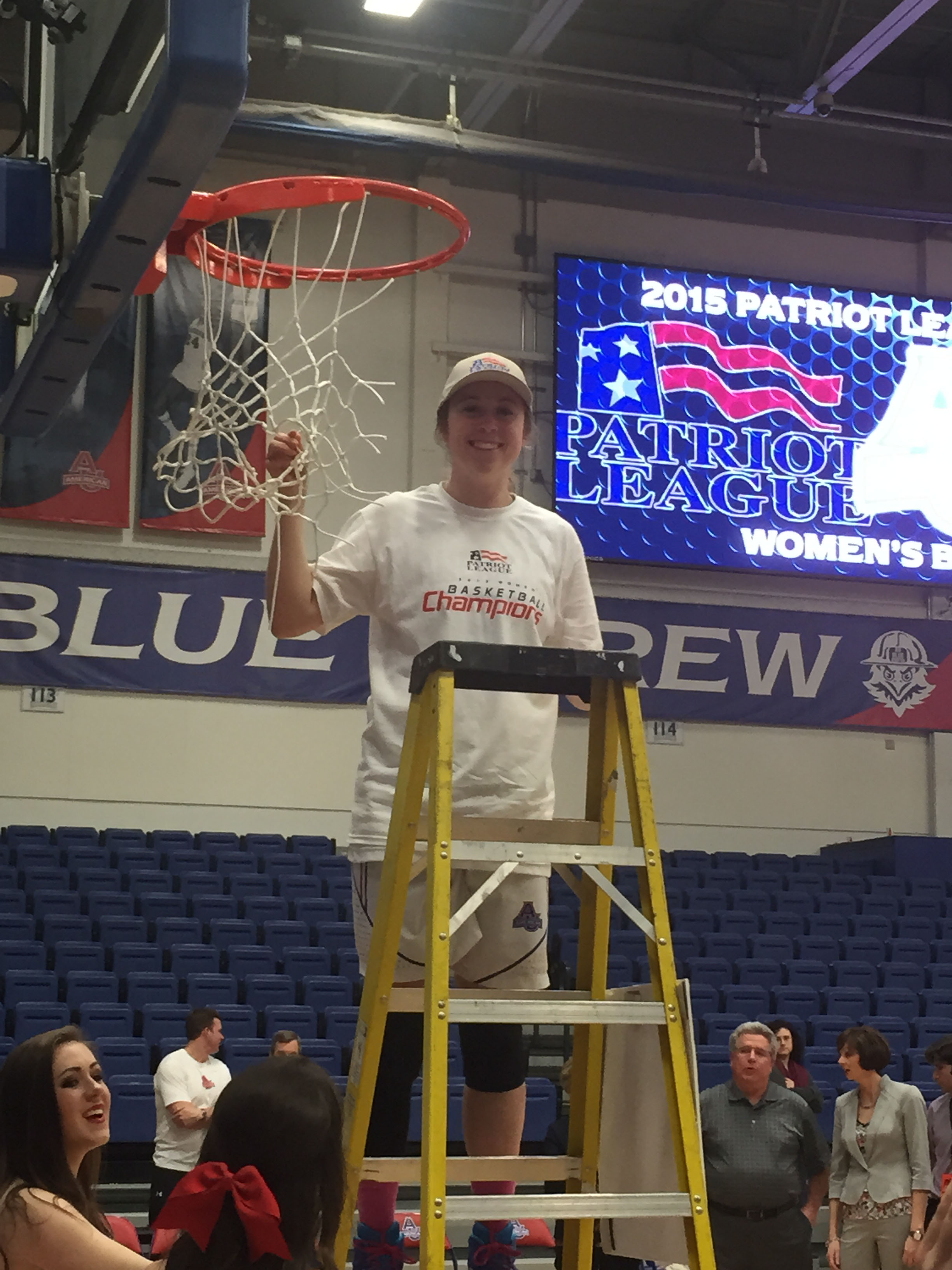 Curtis also found her rhythm after the halftime break, scoring 11 points in the second half of play compared to her two points in the first half. She sank a lay-up with five minutes remaining in the game to extend the Eagle’s lead 57-44, and her shot brought the crowd to their feet.

The Eagles will look to maintain their strong defensive play as they head into the first round of the NCAA tournament. Brackets go live on March 16 at 7 p.m., but Gebbia isn’t focused on AU’s potential opponent.

“Whoever we play we’re excited, we don’t care where we go, we just want to compete,” Gebbia said.

AU forwards senior Curtis and junior forward Holmes were named to the Patriot League All-Tournament team for the Eagles. Curtis added 13 points against Lehigh, while Holmes chipped in six rebounds. Senior guard Sarah Williams, who led Lehigh in scoring with 15 points, also joined the list as an honoree.

The AU players celebrated their victory by cutting down the AU net, and as Dumiak chipped away her piece of the rope, she couldn’t hold back her grin. After 40 minutes of basketball, she was not only tournament MVP, she was a team champion.

The Eagles battle to a draw with Boston University