Kacey Musgraves, rising star and reigning traditionalist of country music, showcased her knack for clever songwriting, witty commentary and nuanced vocals at her 9:30 Club set on March 26. Supported by opening act John and Jacob, Musgraves asserted herself as a new kind of presence on the country landscape, open-minded in her politics while proudly traditional in her aesthetics.

Openers John & Jacob made a strong impression with their efficient 40-minute set, as they blazed through nine songs including a cover of The Band Perry’s “Done,” which they co-wrote. With matching brown suits and the occasional trumpet amid the standard guitars and drums, this band appears an equal product of Mumford & Sons and Little Big Town.

John and Jacob kick off a night of country music at 9:30 Club. Photo by Mark Lieberman/The Eagle.

Then the 9:30 Club audience witnessed Musgraves’ effective marriage of form and content. Her singing was as unassuming and solid as her lyrics are subtle and poignant. Better yet, the concert was a full two-hour experience complete with a five-song encore.

The set began with “Silver Lining” and “Stupid,” two standouts from “Same Trailer” that showcase Musgraves’ grounded optimism and snarky wit. Perhaps the concert’s high point came when Musgraves nimbly covered TLC’s “No Scrubs” and blended her gleeful kiss-off “Step Off” with Bob Marley’s “Three Little Birds.” She may be a country traditionalist but her on-stage mashups and in-studio collaborations affirm that Musgraves is no genre hermit. She’s collaborated with her friend Katy Perry on the pop superstar’s tour and in a special for CMT, and she’s expressed her love for artists like Rihanna and Miguel in addition to obvious inspirations like Loretta Lynn and Willie Nelson.

She also hasn’t shied away from expressing distaste for her own genre. Musgraves’ latest country criticism came during this concert, when she criticized radio programmers for cutting Little Big Town’s “Girl Crush” because they believe - erroneously - that the song promotes the “lesbian agenda.”

“Get with the f***in'’ times,” Musgraves retorted.

Politics aside, Musgraves’ most subversive act is her vivid songwriting, which cuts through cliches and dispenses with conventional gender dynamics. On “Merry Go Round,” she laments the corruptive forces that make small-town life a drag. On “Keep It to Yourself,” she dismisses any possibility of reconciliation with an unpleasant ex. The lazy groove of “Blowin’ Smoke” conceals a streak of independent-minded rebellion, and the aspirational pull of “On the Map” empowers listeners to reconstitute their broken selves.

Musgraves never emulates the onstage firepower of Miranda Lambert or the broad appeal of Taylor Swift. She was calm, precise and focused. Her mid-concert banter was wry and occasionally profane. Sipping her beverages from a plastic cup, and later from a mason jar, Musgraves’ sound was translated perfectly from studio to stage.

The audience seemed to know most of the words to every Musgraves song but sang the loudest during her cover of Miranda Lambert’s “Mama Broken Heart,” which she co-wrote for herself before giving it to Lambert as a demo.

The audience’s made it easy to forget that country radio struggled with “Same Trailer, Different Park.” Even the album’s biggest commercial hit, “Follow Your Arrow,” stalled at number 10 on Billboard’s Hot Country Songs chart. But judging from the sea of cell phone flashlights that waved along during “Merry Go Round,” commercial success isn’t everything.

The audience heeds Musgraves’ request for flashlights during “Merry Go Round.” Photo by Mark Lieberman/The Eagle.

Perhaps greener pastures lie ahead for Musgraves’ commercial fortunes. Her new single “Biscuits,” which previews her forthcoming album due in early June, has the same anthemic jauntiness that made “Follow Your Arrow” an award winner if not a chart topper. Musgraves also performed two new songs from the album: the ballad “Rainbow,” and the cheeky “Cup of Tea.” Happily, neither sounds like a radical departure from her previous songs.

Whether country radio pays attention or not, Musgraves has carved out a fruitful niche without resorting to outsized spectacle or empty provocation. With sharp, thoughtful songs Musgraves has nothing but “Happy Trails” ahead. 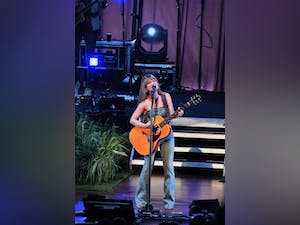 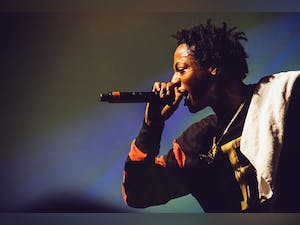