Pairs of students huddle over pieces of paper and laptops in the basement of Ward. Their arms shield quickly scribbled down writing. Occasionally, a head lifts from the whispered conversation to look at another pair just out of hearing range.

Each pair on the AU Debate Team hopes they have the case that will stump the other, but tonight is just practice.

“It’s fun to stretch your mind muscle a little bit,” said Isaac Klipstein, a freshman in the School of Public Affairs who debated in high school and is a novice member of the AU Debate Team.

The team of 25 to 30 active members competes each weekend at events through the American Parliamentary Debate Association. The association is student-run and includes Ivy League schools, such as Harvard University, Yale University and other notable colleges like William and Mary and Johns Hopkins University.

Debate topics range from constitutional law to international relations, according to President Tula Biederman, who is a senior in the College of Arts and Sciences.

But, the subject of debate presented at practice on Oct. 21 by Klipstein and varsity member Andrew Episcopo, a sophomore in SPA, was far less daunting.

“Should Luke Skywalker ally with his father?” Klipstein said. “There are holes in both arguments, which is the problem with all debates.”

The timed rounds are a sudden explosion of words. With practice, they transform into well-presented arguments and careful demolition of the other side’s positions. At competition, one pair is determined to be the winner and moves forward to face another team. 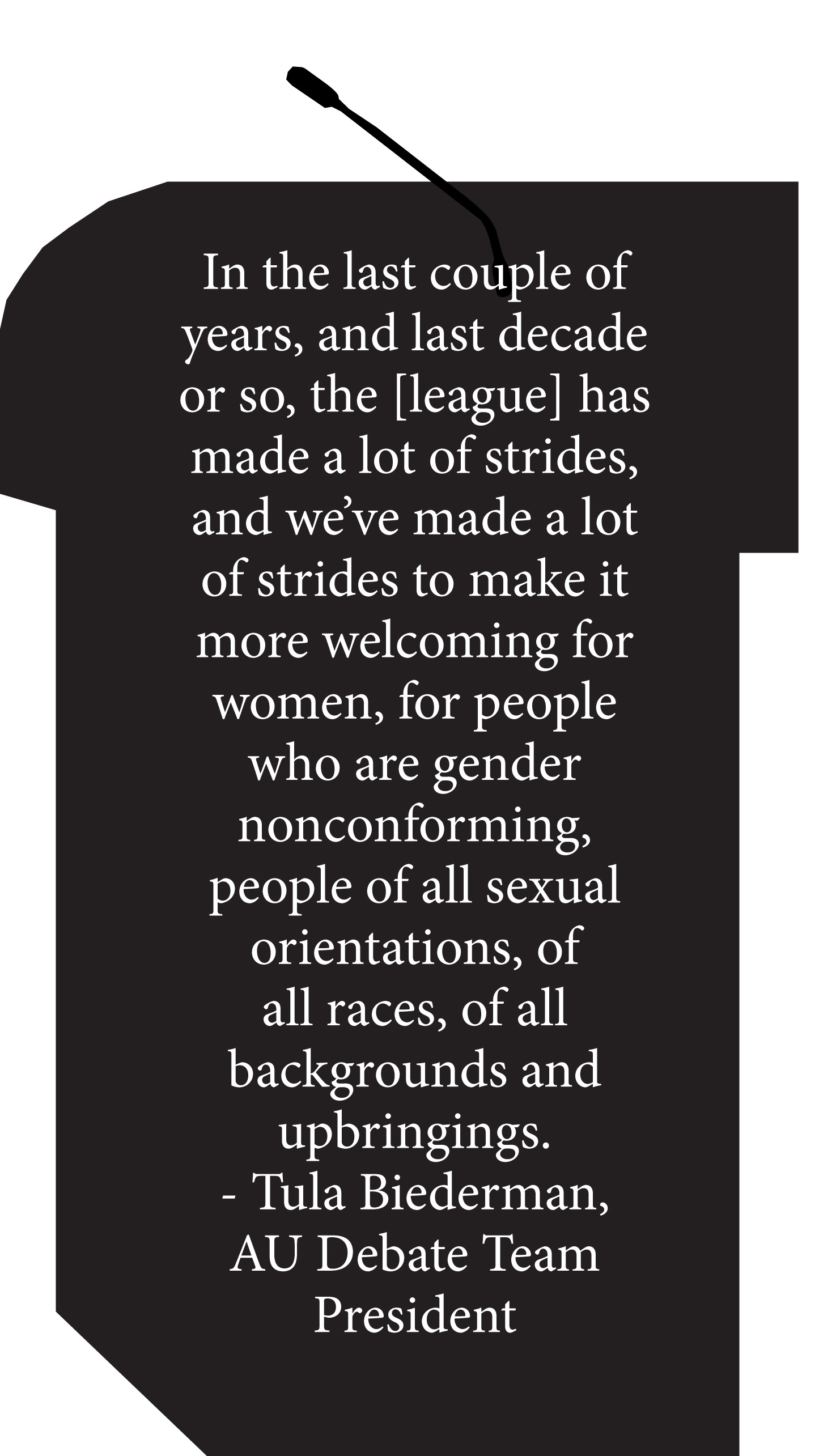 The educational benefits of being on the team quickly become clear, even during a practice debate. Improved public speaking, a demand for critical thinking and the necessity to organize one’s thoughts under pressure is a natural consequence of being on the team.

These tools translate well into college and professional life, Biederman said. Debating teaches individuals how to deal and work efficiently with people as well as form thoughts quickly when called upon, she said.

Beyond the educational side of the team, there are also strong competitive and social elements.

The team travels together locally to George Washington University, as well as outside of the District to attend tournaments. Due to travel costs and entrance fees ranging from $90 to $120, the team often travels by car and stays on the dorm room floors of the hosting school.

While sleeping on a floor may not be everyone’s first choice, the exposure to different people, schools and topics is a major plus for Biederman.

“You get exposed to people from a lot more places,” she said.

The team receives a small portion of the school’s club budget, but to help cover the cost of entering tournaments the AU Debate Team hosts tournament called ProAms each fall and spring. The tournament is unique, because it pairs an experienced member, who has been debating for one or more years, with novice team member.

The tournament brings schools to AU’s campus, which had over 300 students in attendance last year, Biederman said. The team hosted their most recent tournament on Nov. 14 and 15.

The AU Debate Team is not ranked in the top 10 colleges, speakers or teams in their league, but novice Zoe Morgan was in eighth place for Novice of the Year as of Nov. 17, according to the league's website.

For Biederman, being part of the debate team is more than winning tournaments.

“I really want to create a safe environment,” Biederman said. “Our debate league hasn’t always been a great place for everyone. For a long time it was great place if you were white and male, and upper class and straight.”

However, there has been a lot of educational and outreach action within the American Parliamentary Debate Association to change the tone of the organization.

“In the last couple of years, and last decade or so, the [league] has made a lot of strides, and we’ve made a lot of strides to make it more welcoming for women, for people who are gender nonconforming, people of all sexual orientations, of all races, of all backgrounds and upbringings,” Biederman said.

Members of the AU Debate Team have served on Women’s Initiative, equity board and expansion boards in order to help accomplish this.

The AU Debate Team also strives to make education a notable part of their ProAms tournament. The team gives presentation on what equity means, which can range from homophobic slurs to other personal attacks that diminish the educational value of the experience for any of the school’s debate team members, Biederman said.

“We really try to bring these issues out early on to show novices early on, because I think that’s the best way to change the culture,” Biederman said.

Disclaimer: Zoe Morgan is a staff writer for The Eagle.