Members of the Student Worker Alliance hand-delivered a letter to the Aramark district manager on Oct. 20 that detailed students’ and dining facility employees’ discontent with the company’s “culture of disrespect” at AU.

Approximately 20 students marched from the front steps of the Mary Graydon Center to an office behind Freshii and Einstein Bagel Bros to deliver the letter of employee complaints to Kenneth Chadwick, resident district manager of Aramark at AU .

The goal of the demonstration was to inform the Aramark management of workers’ grievances and to make sure that the management could not say that they had not been informed in the future, said Katie Plank, a junior in the College of Arts and Sciences.

“We feel like today was a success,” Plank said. 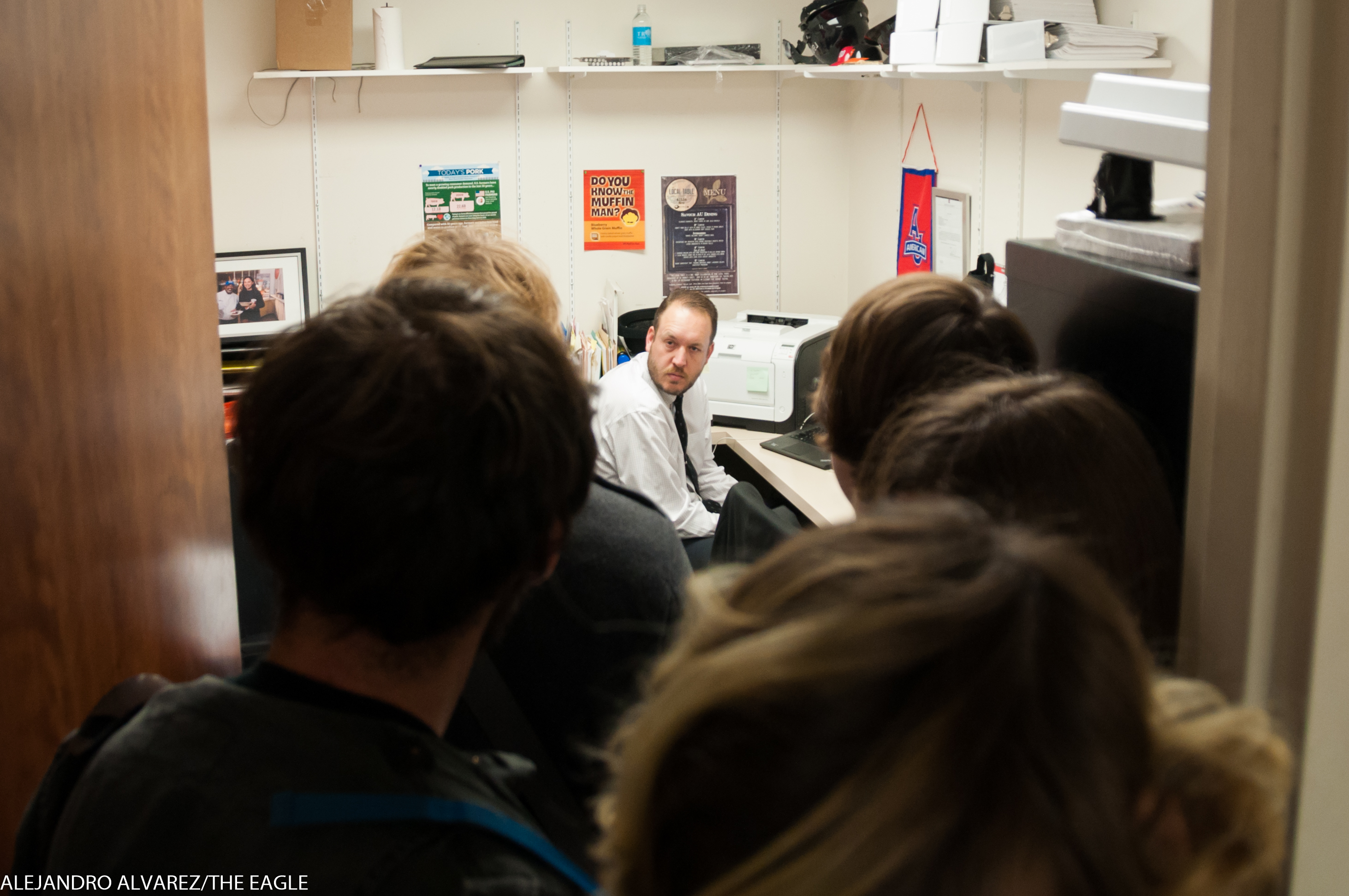 Students crowded into Chadwick’s office to voice their concerns over alleged mistreatment of Aramark workers.

The demonstrators crowded into Chadwick’s office while Colin Moir, a freshman in the School of Public Affairs, read the letter to Chadwick. Moir co-wrote the letter with another student whose name could not be confirmed.

The letter detailed workers’ complaints about potential mistreatment at AU’s dining facilities. The Student Worker Alliance was informed by one or more dining facility employees that managers were saying homophobic and racial slurs to workers. There were also incidents of managers yelling at employees in front of other employees, according to Sean Reilly-Wood, a senior in CAS who participated in the demonstration.

Several Aramark employees have also had their positions cut with little to no notice, Reilly-Wood said.

“We the students demand that Aramark resolve these grievances to the satisfaction of the workforce,” Moir read from the letter.

Chadwick requested the physical copy of the letter Moir read after the demonstrators had finished.

“Thank you, I appreciate you bringing those concerns up, and I’m actually not aware of a lot of these, but I’ll be sure I look into it,” Chadwick said.

The demonstrators chanted, “One, we are the students; two, we are united; three, we want justice for our workers,” as they marched past Einstein Bagel Bros, and “Aramark, back off it – put people over profits,” as they left.

A male employee at Einstein Bagel Bros fist-pumped the air and chanted “Fight! Fight!” as the students marched out of Chadwick’s office past the food station.

The management’s actions to come will determine if the situation will escalate to a Student Workers Alliances campaign, according to Lane Balassie, a freshman in School of Communication who has been with the group since the beginning of the school year.

Overall, the students were happy with the outcome of the demonstration.

“We achieved our purpose, but there is work to be done,” Plank said.

Redistricting gave AU a second ANC seat. Why is nobody on the ballot?