Junior Nick Regan achieved All Patriot League First-team recognition, finishing seventh in the men’s 8k with a mark of 25:26.76. Senior John Pope and freshman Brendan Johnson were named to the Second-team with their 10th and 11th place finishes and marks of 25:36.49 and 25:36.81, respectively.

Johnson also won the Rookie of the Year award, becoming the first Eagle to win the award since 2005 at the 2013 Patriot League Cross-Country Championships in Easton, Pa. Johnson is the third AU runner to earn the award.

Overall, AU’s men’s team finished third with 66 points, losing out to Navy with 61 and Lehigh with 63.

The next event for AU will be on Nov. 15 as they head to Bethlehem, Penn. for the NCAA Mid-Atlantic Regionals. 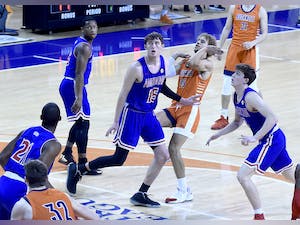