Since AU's location in Washington, D.C., is one of its defining attributes, you will need to use the city's varied resources to make the most of your time here. While going away to college can be a stressful experience, the adjustment of living in a large city like Washington can make it even more trying. However, using a little common sense while making your way through town can make your D.C. experience a safe and rewarding one.

While the area around AU is generally safe, other areas of the District are not as fortunate. The recent rise in crime in previously "safe" areas of D.C. underscores the fact that the safety and character of a neighborhood can change very quickly - sometimes block by block. Following a few basic safety tips will help prevent you from becoming a target.

? Plan ahead. You should try to familiarize yourself with the route you will be traveling, whether you're going to walk, bike, take the Metro or drive. The easiest way to do this is to use an easy online route generator like Mapquest.com or Google Maps (maps.google.com). The Washington Metropolitan Area Transit Authority is the governing body of the Metrorail and Metrobus systems and has a reliable trip planner on its Web site at wmata.com.

If you do become lost, continue to move towards your destination if at all possible. Be careful when asking strangers for directions or assistance and always be calm and collected.

? Travel through large, public spaces. Walk along major surface roads and through heavily trafficked public areas as much as possible. Try to avoid walking through deserted areas like alleys or empty lots, especially at night.

? There is safety in numbers. Try to travel with a group of friends, especially at night.

? Don't flaunt your valuables. If you flash large amounts of cash or other valuables, you're just asking for trouble. Keep your belongings in a secure bag with a zipper or other good closure and only take out things like your wallet when you're indoors and ready to use them.

? Cross streets with caution. Even the most pedestrian-friendly city has problems with people getting hit by cars while crossing the street. Some streets are notoriously dangerous for pedestrians to cross, such as the intersection of M Street and Wisconsin Avenue NW in Georgetown. While pedestrians legally have the right of way at crosswalks in D.C., this will not stop some drivers from plowing through anyway. Just be careful.

? Lock your door. Even though AU's dorms do have secured entrances, there are still scores of thefts from unlocked rooms in the residence halls every year. While it may be inconvenient to carry your room key around, getting your laptop, TV, stereo or iPod stolen is definitely more inconvenient. Locking your door is the best way to prevent your stuff from being stolen.

? Sketchy-looking neighborhoods usually are sketchy. The general appearance of a neighborhood in D.C. is usually a good indicator of how safe it is.

? Always be aware of your surroundings. Do not distract yourself when walking, and be aware of what is going on around you at all times. People wearing headphones or talking on cell phones are often much easier targets because they are oblivious to what's going on around them.

Washington, D.C., has one of the best public transportation system networks in the U.S.: the Metro. The Metro system is divided between the bus system, Metrobus, and the subway system, Metrorail. There are also 87 different taxi companies licensed by the D.C. Taxicab Commission, which are listed on its Web site (http://dctaxi.dc.gov). While mass transit in the District is very easy to use, some aspects of both the Metro and taxi systems can be confusing to new riders.

? Rules on Metro are strictly enforced! Metro has a strict policy of enforcing its own rules, especially against eating or drinking. Just ask the girl who got arrested in 2000 for eating french fries on her way down to a station platform.

? D.C. is a bike-friendly city. The best part about D.C. is it's not that big, and on a bike it's even easier to explore. Many people in D.C. commute via bicycle, a great way to save money and get your daily dose of exercise. There are also several excellent bike shops, including City Bikes in Adams Morgan and Chevy Chase, Md., which offers free service for a year after purchase (www.citybikes.com). The Metro and Metrobuses allow bikes on board. Metro trains allow them anytime except rush hours as long as you don't block the center train door, and most Metrobuses have racks up front to stow your 12-speed if you just can't bear to ride up that huge hill.

? Late-night transportation is limited. Metrorail does not operate between 3-7 a.m. on Fridays and Saturdays, and not between midnight-5 a.m. from Sunday to Thursday. Metrobuses operate every day at all hours, as do all taxi companies.

? District taxi charges are different than in other cities. Rather than basing fares on distance traveled, District cabs charge based on a zone system. Riders can avoid an unnecessarily large charge near zone borders by exiting the cab just before a division between zones and walking the rest of the way. Most taxicabs have zone maps, or just ask the driver.

? Be sure to allow time for delays. Traffic delays are common in the District, and the Metro can also be delayed due to maintenance and other problems. You should allow a little extra time for such delays so you'll get where you need to be on time.

? Stand to the right on escalators. A well known, but unwritten, rule among Metro users is that if you plan to stand and wait on an escalator, you should stand on the right side. This leaves the left side of the escalator clear for busier commuters to walk. This will be easier to remember if you forget ... and get yelled at harshly by a man in a suit bounding down the escalator at a breakneck pace.

Nearly everyday of the year, it seems the Mall and other historical parts of the District are teeming with tourists and schoolchildren. While some District residents complain they can't claim ownership to their own city's downtown area, they don't complain too loudly - tourism is one of the District's largest industries. Residents of the District have also found ways to enjoy the Mall and the historic sites surrounding it without having to deal with large crowds.

? Best times to visit most D.C. attractions: Try to visit museums and monuments on the Mall during off-peak times. The winter months and early mornings are the best times to avoid crowds.

? Don't try to do everything at once. Unlike tourists, D.C. residents have the twin luxuries of time and proximity. Rather than trying to rush around and do every museum and monument in a day or two, limit yourself to one or two attractions per visit. The result will be an enjoyable, stress-free experience.

? Be wary of street vendors. While everything seems to be more expensive in D.C., it doesn't justify the exorbitant prices some street vendors charge for food and drinks. You'll need to decide whether the convenience of a $3 Sprite on the Mall outweighs the relative cheapness of a similarly-sized $1.25 bottle in your dorm vending machine.

? Plan ahead to avoid crowds and road blocks. It should surprise no one that the Mall is a prime location for numerous protests, concerts and other events. While these events are an important part of District life, they can be difficult to maneuver around if you don't plan on being a participant. Keeping up with the local news should give you a fairly good idea of when and where these events will occur. OTHER TIPS:

? Panhandlers. Sadly, some panhandlers are con artists, and their wrongdoing ruins the people who are actually in need of assistance. If a panhandler does ask you for money, offer to buy him some food or other necessary items instead. In general, however, you should be careful about giving anyone money.

? Security screenings. Be prepared to empty your pockets and have your bags searched at the entrances to government buildings, museums and memorials - even the Botanical Garden. If you consolidate these items before waiting in line, it will help to make the process quicker.

? Tourist relations. It's inevitable that tourists will have no idea how to use Metro farecard machines and will probably block the entire escalator as they lumber from place to place. However, be courteous and helpful when assisting tourists - you would want the same from them if you were visiting their city. 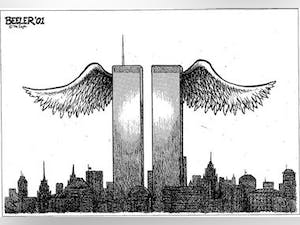 An editorial cartoon that appeared in The Eagle soon after the Sept. 11, 2001, terrorist attacks 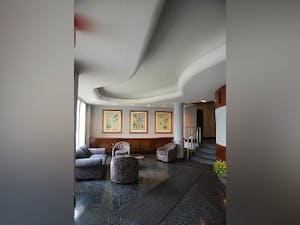 Tired of dorm life? Here's where you can go