Some students in AU political clubs think President Bush's performance in the second presidential debate than he did in the first, which more evenly matched him with his opponent, Sen. John Kerry (D-Mass.)

"He was actually playing a lot more offense than defense in this debate," AU College Republican Vice President Alan Griffith said of Bush's performance Friday night. The president was criticized for being argumentative and impatient during the first presidential debate Sept. 30.

The town hall-style debate took place at Washington University in St. Louis, with the candidates responding to questions from undecided voters.

Bush and Kerry sparred over such topics as Kerry's voting record in the Senate and the speed with which Bush went to war in Iraq.

"That makes it seem more real," said Jon Dawood, president of AU Students for Kerry. "I like it when they get into it a little more."

He said Kerry, who is often criticized for being removed from average Americans, did well at talking clearly about his plan for working with Iraq. Bush is looking weaker on the issue of Iraq lately, Dawood said, among criticism from L. Paul Bremer, who was in charge of the Coalition Provisional Authority, that there were not enough soldiers in the early stages of the war. Weapons investigator Charles Duelfer also said Friday that there were no weapons of mass destruction in Iraq last spring, although Bush had said there were.

Dawood also said Kerry talked clearly about what he thought of going to war with Iraq and his plan for reducing the involvement of the United States military there. "It's not that he didn't have these plans, he just wasn't saying them," Dawood said.

Griffith said that Bush did well discussing criticism that he went to war without the approval of the rest of the world, especially Europe.

"Sometimes in this world you make unpopular decisions because you think they're right," Bush said. "I don't think you want a president who tries to become popular and does the wrong thing."

Dawood said Bush's strongest point was discussing his anti-abortion stance and wish to "promote a culture of life in America."

While he disagrees with Bush, Dawood said this would appeal to those who agree with the president.

According to Dawood, another one of Kerry's strong points was responding to questioner James Varner's request for Kerry to "look directly into the camera and, using simple and unequivocal language, give the American people your solemn pledge not to sign any legislation that will increase the tax burden on families earning less than $200,000 a year during your first term."

Kerry said, "Absolutely. Yes. Right into the camera. Yes. I am not going to raise taxes."

However, Dawood said Kerry's weakest point was when he talked about his plans for the federal budget, since the national deficit and budget are major issues. "I think Kerry should have cleared up how to spend that money," Dawood said.

Griffith said, "I think one of the most ridiculous things [Kerry] did was say he was for tort reform."

While Kerry said he and his running mate, Sen. John Edwards (D-N.C.) are concerned about the cost of health care, Edwards made millions of dollars as a trial lawyer by working on medical malpractice lawsuits.

According to Dawood, Bush's worst mistake was his response to questioner Linda Grabel, who asked Bush to name three mistakes that he made as President and what he did to fix them. To that Bush said, "history will look back, and I'm fully prepared to accept any mistakes that history judges to my administration, because the president makes the decisions, the president has to take the responsibility."

"He dodged the question again," Dawood said. "I think a more humble person would have been able to name more than a few."

"I don't think it's going to be a big deal," Griffith said.

"I think it'll definitely help Bush," Griffith said. "He connected a lot better and he got a lot of points across." 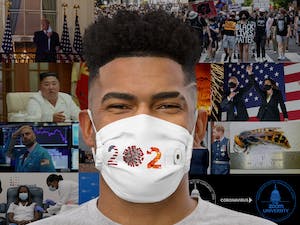